After taking the “sardine red eye” flight back from Las Vegas and getting in on Sunday, late morning, we were wiped out. We still managed to get repacked for the East Coast leg of my Digital WakeUp Call Tour, catch the Cincinnati Bengals football win on TV, and are now ready and excited to go today.

This week we hit Boston, Hartford, New York – LaGuardia, and New Your – Manhattan. Come on down ;~)

Hey, before we hit the road, let’s get to a quick edition of Quick Hit Monday. Here we go…

I was asked by my good friends at Westcott if I would do a booth demo for them during the Tech Expo at Photoshop World. The booth demos are always good fun so happily I said “yes.” 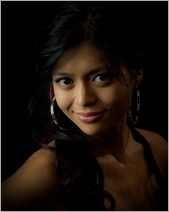 My model was beautiful Lexy, and we captured some great images. Westcott makes one of my favorite light modifiers in the world. It’s called a Halo. You can see me using it in the third shot below.

What I love about the Halo is that it is NOT a flat soft box like so many others available on the market. The convex shape of the Halo easily wraps light around the subject, bounces a little light on a added reflector for fill, and even spills some light on the background. 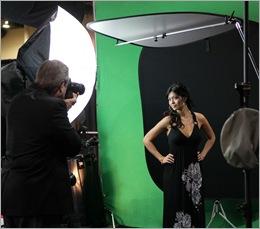 Oh, this sounds like this is turning into a Technique Tuesday post, so on that note, I’ll invite you to check out the Halo at Westcott’s site right here. It’s been my only light modifier choice when ever I’m shooting in the studio.

ExpoDisc Has More Than Just Still Camera Use

During the Tech Expo, we visited with my buddy John, at the Expo Imaging booth. I’ve been friends with the company and the owners for quite a number of years. Anyway, we got talking about things in general and John told me they have experienced quite a spike in sales of their ExpoDisc lately.

Here’s why. The ExposDisc [link] is an extremely close calibrated white balance tool that I’ve been using for years to get that perfect color balance on my shots. John says because of the the ExpoDisc’s critical calibration it has been rediscovered by photographers/videographers wanting the perfect color balance with the new still/video DSLR’s that have been hitting he market lately.

Hey gang, that’s good news. I’ll have to give it a try on my new Canon 7D. 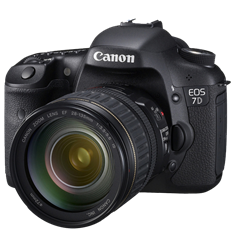 Yep, It was sitting on my desk when we arrived home and I couldn’t wait to open up that puppy. This post is by no means to give you my first impressions of the camera but, OK – I’ll give you just a few.

1. The low noise capabilities of the 7D far surpass that of the 50D, much closer to the noise characteristics of the Canon 5D. That’s not to say I don’t like my 50D, I just like “higher ISO” capable cameras. 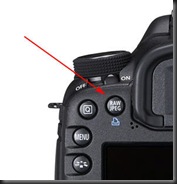 2. I stumbled on this little button on the top left of the camera. It’s the RAW/JPG button. You set it up to shot whatever combination of RAW/JPG you want for your next shot.

I know that sounds confusing. Let me explain. These higher megabit cameras, the 7D is an 18 megapixel camera. That means a whole lot more “hard drive real estate” used up when shooting.

As a wedding photog, do I really need to expose every image – over 3000 images in my case - as a RAW file, probably not. Why not set the camera to shoot JPEG only on secondary images. Then when I need the RAW file for the main images, I just hit the new RAW/JPG button. Once pressed it will give me either/and or both image formats.

This clever little button may be the answer to the insanity of 50 gig jobs chewing up all our hard drive space for just one job. I’m just thinking “out loud”. Drop me some of your thoughts in the comments section below. Thx.

3. Unfortunately the 7D is not supported but the latest version of Lightroom, but that should be coming very soon so no big deal yet. The funny thing is that that my trusty latest version of Irfanview – about the best image viewer on the market (PC only) opens the images just fine.

BTW, here is the latest group of reviews on the Canon 7D right here.

Topaz software was showing their very interesting suite of software at the show. I stood there for several minutes watching their magical demo. Here is the link to their site right here.

I’m a guy who likes to “fuss and fiddle” with my fine art images and Topaz appears to open the door to some very cool possibilities. They have 10 plug-ins in their entire suite. I didn’t get a chance to see all of them demo’d but their site does a pretty good job of introducing you to their products.

Not only that, but they are getting “RAVE” reviews all over the place. I’m planning to pick up a copy and give the Topaz plug-ins a run for the money. I’ll keep you posted.

My Wedding Book “Captured By The Light” – Update 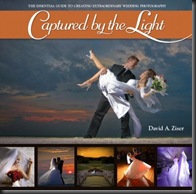 I know many of you have pre-ordered my new book, Captured By The Light, due to release in the not to distant future. I got a chance to sit down with the Kelby Media guys and Peachpit and ask about the release date of the book. Amazon and Borders are both showing very late dates, but that’s kind of a “worse scenario” date.

Kelby Media tells me it’s on the front burner and it’s “pedal to the metal” to get it out the door. Then it’s over to Peachpit for printing – about another 6 week process. All that said, I’m hoping for a Christmas delivery. Boy, do I hope I’m guessing correctly. I don’t have much say over the matter but I will keep you posted.

Hey gang, that’s it for me today. We are heading to Boston in about 60 minutes. Hope to see a lot of DPT readers on the east coast leg of my DWUC tour – please come on up and say HI.

Over and out, David