Friday: Wrapping Up The Week

I’m at the keyboard early this morning because I know that after we wrap my Master Class today LaDawn and I are just going to
“chill” a bit and enjoy the beautiful fall scenery we are experiencing this year. 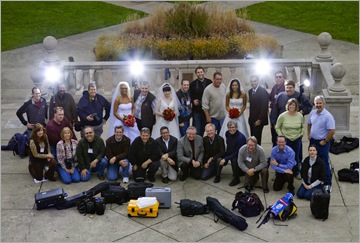 I have to say, we have had a great class this week.  Feedback from the class is that everyone really liked the new format.  We will read all the comment sheets from this week’s attendees, gather additional input from the “coaches” at our wrap up meeting early this afternoon. Then we will tweak where necessary, and see if we can make the upcoming Spring Master Class April 26 –30, 2010 - even better. My thanks to everyone who attended this week’s class, my team from the studio, the coaches and assistants that  shared their knowledge and expertise to further enhance the Master Class experience and made it such a good time.

Next week look for a image wrap up of the week too. BTW, don’t you love the picture of the class this time around.  I thought, heck, the class is mostly about lighting so let’s really show all the strobes firing;~)  Our class picture was taken by Jesica Bruzzi from B&H who came by as a consultant for a few days this week. Thanks Jesica for a great shot.

I hope out DPT readers didn’t mind me veering off our normal topic agenda too.  I just thought a peek into what was going on this week with new cameras and LR3 betas could be pretty darn helpful. We’ll get back to our normal schedule next week – including the MIA Technique Tuesday episode.

And speaking of next week, can you believe it, we head out on our last leg of my Digital WakeUp Call Tour.  We are heading to Raleigh, N.C. on Monday, Charlotte, N.C. on Tuesday, Columbia, S.C on Wednesday, and wrapping the week in Atlanta on Thursday.

We have 10 cities to go. Here is the list of remaining dates right here. We hope to see you there!

Hey gang, I do have a few items I want to remark on today, so let’s get right to it.

Just A Few More Notes On The Canon 7D

After Wednesday’s post [link], I received lots of comments about the camera’s dark previews in Lightroom 3 Beta.  Thanks to all who commented and offered insights into the issue.

I too believe it’s a LR3 issue.  Class members were having the same problem this week with the LR3 beta some were using in class.  I heard comments like, “It looked good coming in then the preview turned dark.”  That indicates to me that LR3 beta is just posting a preview that represents it’s best guess as to what the image should look like.

The Lightroom team has literally built version 3 from the ground up so when running the beta I don’t expect things to be perfect.  Adobe did a good job with LR2, so I suspect when LR3 ships we are all going to be quite happy.

I’m going to give some of the suggestions from our readers a try and see what happens. BTW, I found it most interesting when I read Wink’s comment referencing the link to The-Digital-Picture.com site. [link] Their review reports that their testing shows the camera is exposing 1/3 stop darker than other camera bodies. Hummm…  We’ll see what the next firmware brings. 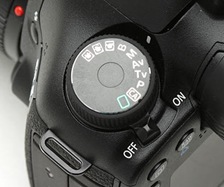 Oh, one more feature I love on the 7D! THREE, count them, three custom settings that the user can set.  The 40D had 3, the 50D only had two, but the 5d Mark II had 3 so I’m glad to see Canon put 3 back on the 7D.  This feature comes in real handy when you need to change to a completely different set of settings during the heat of the wedding shoot.  It’s like having 3 cameras in one. I love it!

Another great feature on the 7D is the “My Menu Settings” feature.  The camera lets you add your most used menu choices all in one place so you can get to them quickly when need be.  No more drilling down through all the myriad choices to get to the one you want.  Now everything you use everyday is listed in just one place. Another – very cool!

This is a quick one folks, I took a peek at the import function once again and still am not impressed. I decided to add 4300 images from a wedding to my catalogue.  As usual, LR3 beta wanted to populate the screen with all the previews.  My best guess it that it would have taken several minutes to accomplish the task. I waited 15 minutes and LR3 still had a long way to go.

While it was populating the images, I hit “Select None” then had to scroll endlessly to find the blank icons that represented the 3 images I wanted to import.  I checked them and in a short while, they popped into my catalogue.  All I want to see is the file list – who cares about seeing 4300 thumbnails! On a real job, they are all coming in anyway!

Maybe I’m over-reacting a bit, but the new import functionality is just no fun, time consuming and nearly impractical for day-to-day use. Don’t get me wrong – I know I’m coming across maybe slightly negative ;~) but I still love the new features in LR3.  And, yes, I plan to hang in here with LR3 a bit longer, dig under the hood, and just see what this baby will do.

Hey gang, that’s it for me today.  We wrap the class today and, can you believe it, we pack the van tomorrow and head out Sunday for Raleigh, N.C. Yep, we’re driving . LaDawn and I love seeing America.

Everybody have a great weekend.  I hope your little pixels get lots of goodies on Halloween.  I’ll see ya’ Monday in Raleigh.

On the road again, -David