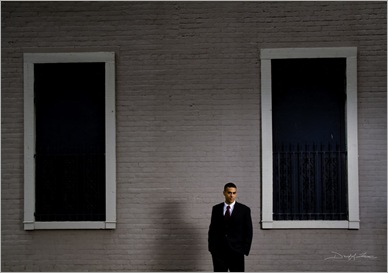 I made this image - kind of an urban portrait -  yesterday during my Master Class shoot.  It’s probably my favorite shot of the day.  I like the two windows flanking the groom.  Their blank emptiness seem to enhance the feeling of the aloneness of the subject that I sense in this shot. Yet the soft shadow cast on the back wall suggests a mysterious presence in the scene.  Lighting was from camera right with my Quantum shooting through my Zumbrella.  Since I was shooting faster than the native sync speed, I had to turn the camera upside down to keep my subject in the flash sync part of the viewfinder, hence the slight vignetting at the top of the image.  Camera specs: Canon 7d fitted with 18-200mm IS lens at 24mm, F5.6 @ 1/400 second, ISO 200.  Enjoy!  -David

p.s. Hey gang, look for the rest of the post later today.  I’m running late for class.  See ya’ after lunch.  -David