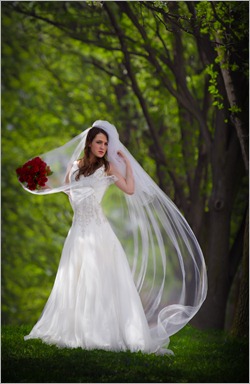 Here is another image made during my Master Class a few weeks ago. We were shooting at the historic St. Augustine Catholic Church in a very old part of the city.  The challenge was to capture a great image of the bride among the urban surrounds.

My long lens and large aperture did a lot to disguise homes in the background.  A little more Photoshop did the trick to eliminate the rest of the buildings which were previously visible on the left of the image.

What I loved about the image was how I got the wonderful repeat of the tree line on the right.  The long lens helped to give me a nice background too.  The slight puff of wind did the rest by catching the veil perfectly and adding the soft curved lines to the image.

Lighting was a bit trickier.  I needed to light the bride from the right because of how the wind was blowing. I wanted to use a large aperture so using a flash was not an option.  I chose to use a reflecting panel, my Sun Spotz,  instead.

I didn’t obtain quite the amount of reflected light back on the bride that I wanted but it was still enough to illuminate the subject adequately. It was the blowing veil that carried the image anyway;~)