The Hills Are Alive With The Sound Of Music!

It’s interesting to note that when we booked this part of our travels we had no idea that Salzburg was so close.  It was only when checking where I could conduct my Scott Kelby Photo Walk that I discovered that Salzburg was only about an hour from where we were staying. We checked in the Crown Plaza Hotel on Friday, a very nice hotel BTW, that had great room rates on Priceline – I’m always the price shopper you know ;~) We then set out to explore the city in the evening and found it delightful. 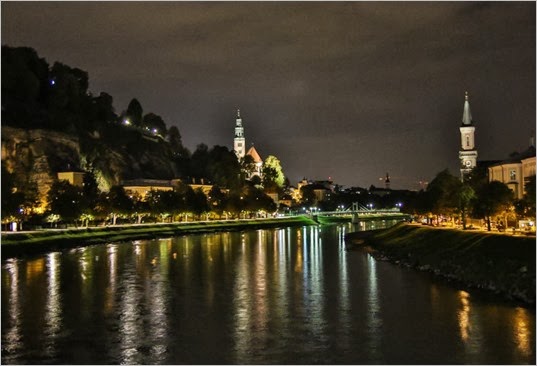 We wondered the city that evening to get an idea of just where I was going to be leading my group for the photo-walk the next day.  That’s when we began to notice that the city was indeed “alive with the sound of music”.  Salzburg, as most of you know, was where the most popular musical of all times was filmed. And, who was one of the movie’s biggest fan? You guessed it – LaDawn!  Once she discovered Salzburg was Sound Of Music central, I knew I was in trouble.

Anyway, the highlight of the day was the four hour bus tour with Panorama Tours with Naomi, our tour guide and Lazlo, our bus driver.  Turns out Lazlo danced with Julie Andrews years ago when he was with the Hungarian Ballet and even had photos to prove it.

Naomi was the best tour 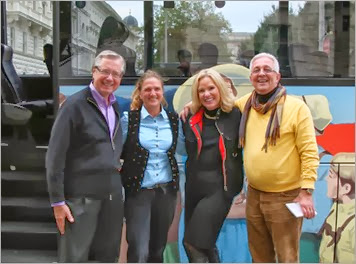 guide you could have to show you the sights in any city.  She was personable, fun and funny, thoroughly knowledgeable about all the sites and mostly a pleasure to hang with.

I’m not a big tour bus fan, but I have to say that this was about the best afternoon I could have spent in Salzburg and Naomi’s contribution to that experience was a big part of our total enjoyment of the tour. 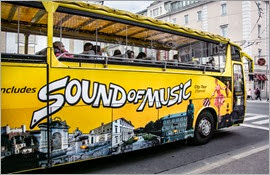 We climbed onto the large, comfortable Panorama tour bus and shortly began the tour.  I liked the fact that the windows were super big, sparkling clean, and totally clear with no tinting of any kind – perfect for “drive-by” photography.

Let me turn the post over to LaDawn to give you the Sound Of Music tour play-by-play for the next few paragraphs.

Our Wonderful Sound Of Music Adventure

From LaDawn:  “Let me tell you why I was so excited to share in the “Sound Of Music” experience is in Salzburg.

I can fondly remember from my early childhood, I was around 9 years old, going into Dayton, Ohio with my younger sister, Lucinda, our Mother and our neighbor to see this impressive film for the first time. My sister and I performed many of the songs in our small rural community of Brookville, Ohio and I have watched the movie at least 10 times growing-up.  Now here I was, in person, in the middle of the movie….well almost.

For those of you that no idea what I’m talking about let me give you a little background. The Sound of Music is a 1965 American musical film directed and produced by Robert Wise and starring Julie Andrews and Christopher Plummer. Based on the book The Story of the Trapp Family Singers by Maria von Trapp, the film is about a young woman who leaves an Austrian convent to become a governess to the seven children of a naval officer widower.

The Sound of Music was filmed on location in Salzburg, Austria and at the 20th Century Fox studios in California, United States. The film won five Academy Awards including Best Picture and was the highest-grossing film of all-time. The cast album was also nominated for a Grammy Award for Album of the Year. While in America this was quite the sensation it was surprising to learn that the Australians REALLY don’t get all the hoop-la! 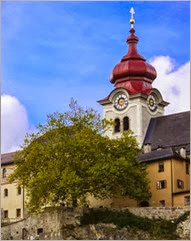 Nonnberg Abbey – Continues today as a Benedictine Abbey and is closed to public visitations, we could see it from the road. Maria  who was a postulant in the abbey after World War I, the abbey has acquired international fame.This is where the Mother Abbess and the other nuns consider what to do about Maria. Also, this location is featured when the children come looking for Maria after leaving their home. Nice to find out this was a real Abbey as the film told the story. 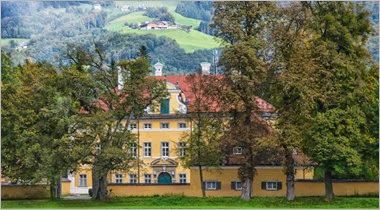 I learned that the inside of the house was actually filmed in Hollywood.  Primarily only two villas in Salzburg that were used for filming, one for the front scenes as Maria shows up down the row of trees trying to “find her confidence”. Also when Captain von Trapp arrives a month later with Elsa Schrader and Max Dettweiler and sees children wearing play clothes that Maria made from old drapes. It was so exciting, yet at my older age I found difficult, to skip and sing down this same walkway as David filmed away. 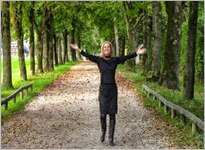 The back of the home was another villa where the famous falling-into-the-lake scene was shot and also many scenes as Maria is contemplating her emotions for Georg and where the children try to sing, My Favorite Things, after Maria has left them. 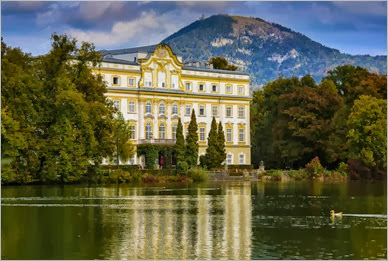 This was also the location of the gazebo featured in the scenes where Rolf, a young messenger, delivers a telegram and then meets with the oldest child, Liesl, outside the villa. He claims he knows what is right for her because he is a year older than she Sixteen Going on Seventeen. 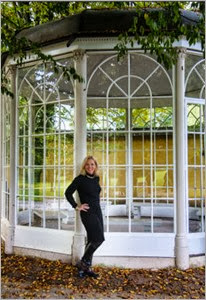 They kiss, and he runs off, leaving her screaming with joy. My memories of these scenes brought tears to my eyes remembering the songs the dancing and those first love emotions from the movie.

Mirabell Gardens - Several scenes were recorded at this beautiful location. Maria and the children sing Do-Re-Mi while dancing around the Pegasus fountain and using the steps as a musical scale. Also featured is the the ivy covered archway and the center fountain. 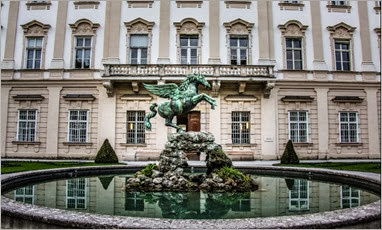 Dancing and singing thru the gardens was definitely a hi-light of the day. Poor David had to put up with my singing performances all day, from the gardens to the villas, even on the bus!

Austrian Countryside – The tour also took us to through a beautiful drive through the Austrian countryside to the stunningly beautiful lake region. This image showcases one of the shots from the opening scene in the movie. 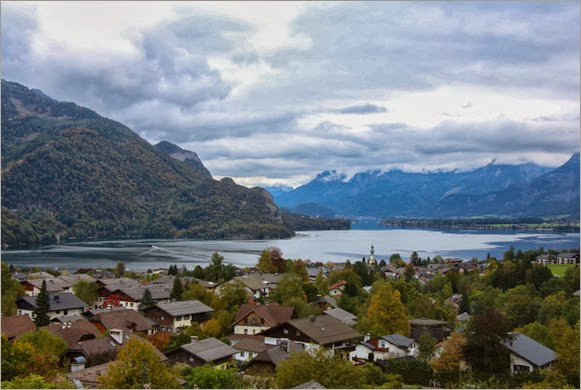 St. Michaels Church in Mondsee, Austria was the location for the BIG wedding scene. The church was magnificent and David and I could easily understand why this film location was chosen for this important part of the film. I remember thinking that Maria’s wedding gown was the most beautiful dress I had ever seen. It still brings back forgotten memories not to mention again more tears to my eyes. I was a little girl and this wedding was certainly BIG time.” 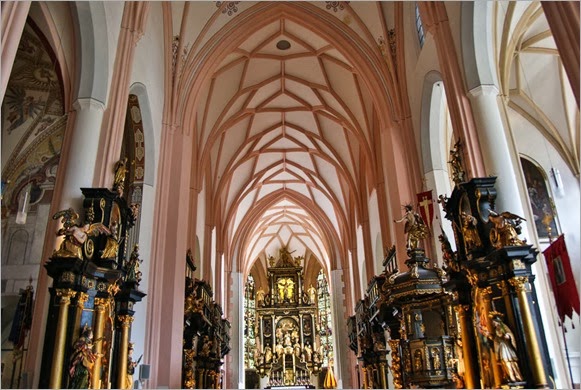 Hi gang, David here again.  LaDawn and I put together a quick photo album of our very enjoyable and fun tour just below so please take a peek.  You can even watch the images as a slide show but if you do you have to hum the songs from the Sound of Music on your own ;~) 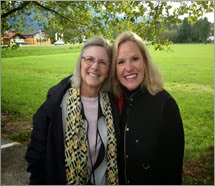 An amazing side-note…..While in Salzburg, Austria on one of many Sound of Music tour buses, seated in front of us was an old friend of LaDawn’s, Debbie (Wilson) Frazier, formerly from Brookville, OH and her husband now from the Columbus, OH area, that LaDawn has not seen in at least 15 years. Talk about small world!!! Just another thrill on day full of emotions, memories, singing, laughing, tears and lots of love from Dave who put up with me for the entire day and night! 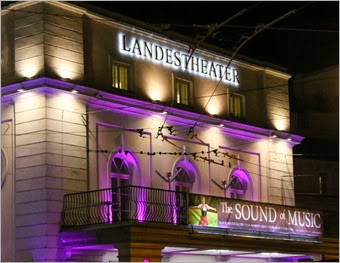 I have to admit I knew I was not getting out of our Salzburg weekend adventure so easily when after the photo walk, as we were heading back to our hotel we passed the Salzburg Theater and guess what was playing, you guessed it – The Sound Of Music on stage.

LaDawn and I both walked in and checked prices for the Sunday evening show.  There were still a few good seats left so we grabbed two in one of the center boxes above the orchestra – some of the best seats in the house as it turned out.

Only one catch, the play was in German – not a big deal, it was sub-titled with the words in English above the stage.  No kidding a German play with English sub titles.  Anyway, the language didn’t make that much difference with my personal Sound Of Music interpreter right next to me who kept me completely up to date on what was happening thru-out the story. 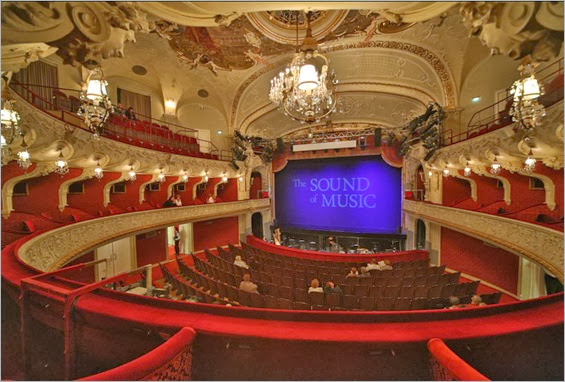 I’ve seen the movie maybe once – nothing to LaDawn’s 10 or more times. Like I said, she is quite the fan. The three hour play got out about 10:30 p.m. we made the hour long drive back to Schladming with LaDawn singing the entire way.

Just to make our Sound Of Music Experience complete, the next day I downloaded the movie from iTunes to my iPad which I then plugged into our flat screen TV in our apartment/condo during dinner.  It was the crowning moment for LaDawn and a nice moment for me too to watch the movie and see the actual locations we had just visited from our tour and both share the thoroughly enjoyable musical moments.  But I have to tell you confidentially – my SOM experience should hold me for at least a few years now;~)

Hey gang, that’s it for me today.  Have a great rest of the day in your part of the world and be sure to check back soon for more photo insights, images, and information during our European travels.