First off I want to thank all our friends around the country that called to see if we were OK after the tremendous tornado breakout this past Friday [link].  The entire state of Kentucky was declared a disaster area by our governor. Just look at the tornado touchdowns on this map and you get an idea of the devastation. 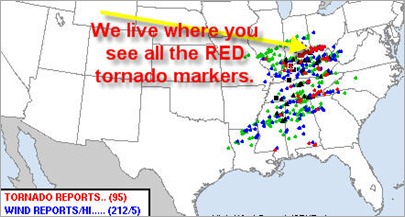 Our hearts and prayers go out to all the individuals and families who were affected by this tragedy.

We flew out at 9:30a.m. and thankfully we were already safely settled in Raleigh, NC when the storms hit.  We were started by a phone call from LaDawn's daughter, Lindsay, that said she thought she just saw a news report that a tornado touched down in our small community and she was really worried.  A quick call back to our neighbors defused our concern when we were told we were getting some nasty weather but no tornados - thankfully.

Once again, thank you for your calls and concern.

Since my Friday post on the new Canon 5D Mark III, more info has surfaced about it’s new super high ISO specs. I think one of the most intriguing specs of Canon's new camera are it's high ISO characteristics.  Nothing turned up on it till late Friday over at DPReview who ran a series of images all the way up to 102,500 ISO [link] - pass me the oxygen ;~). Hit the link then scroll down to see the images. These images were JPEG images processed in the camera which Chuck Westfall, in Canon's announcement said, would offer the best noise reduction result. 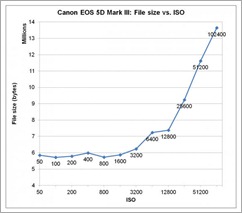 The good folks over at Digital Photography Tips and Techniques [link] also posted an indepth discussion of the Canon's 5DM3 which gives some great insights into just how good the camera is in that department.  It's a great read – check it out right here. 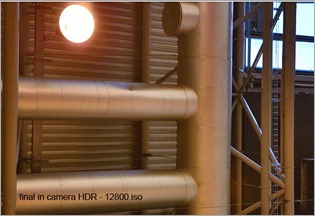 And lastly, head over to Planet 5D to see a video comparing the Mk II video with the Mk III video at 12,800 ISO.  You can give that a read right here. Looks like the Mk III gives up a little detail but I still prefer the Mk III result over the Mk II result.  I guess you’ll have to be the judge.

My Take On High ISOs

One observation that constantly comes up is the fact the detail is lost as the ISO increases.  That's to be expected but how important is that to the event photographer?  My thinking says it's better to capture the special moment and worry less about the technical aspect of the final image. Don't get me wrong.  The technical aspects are important too but I think the "moment" trumps the slight compromise in image quality. 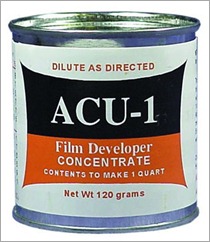 Let's think back to the film days.  Way back in the sixties and seventies I was using Acufine and Diafine developer to push Kodak's Tri-X film ISO all the way to an astounding 3,200 ISO.  Yes, pushing the limits of Tri-X compromised the image to some extent, but when you had to capture the shoot and record that special moment, we had the technology to do it. I was the sports shooter for our college and these high ISO film tricks “saved my bacon” all the time.

Today, 3,200 ISO seems so trivial compared to the 5DM3 102,400 ISO capabilities, but I think it's important to call a spade a spade and stop griping about the slight image compromise in capturing the image. It's still about getting the shot and all this new high ISO technology let’s us do just that.  As you can tell --- I can’t wait to give the new camera a try.

We’ve had a good time since we landed on Friday visiting with all the photographers and vendors at this year’s North Carolina Make It Happen photography convention. My Saturday morning program was well received – many thanks to all for your very kind comments on the presentation.

LaDawn and I are sitting in on a few more programs before we head back home tomorrow afternoon.  Kay Eskridge gave a very informative and practical program on Boudoir photography and showed how she made it an integral part of her business.  Travis Gugelman, whom I have never met till this convention, showed how he raised his small Idaho studio into a $1M powerhouse in only nine years!  Great info in his program, too. We enjoyed a fine dinner with both of them last evening along with James Hanes, Mary Fisk Taylor, and Jen Hillinga. Be sure to check out their links for a peek at some outstanding photography.

This morning we are sitting in on Richard Sturdevant’s program. Richard is king of the hill when it comes to composited images.  He has scored more 100 point images in PPA Print Competition than anyone I know – getting just one is quite an accomplishment in itself!  His work is truly a work of art.

Hey gang, that’s it for me today.  We have another full day at the conference and will attend the big banquet this evening.  I’m working on Part 2 of last week’s Technique Tuesday and am looking forward to having it ready for you tomorrow. Be sure to tune in.

I’ll see you then, David