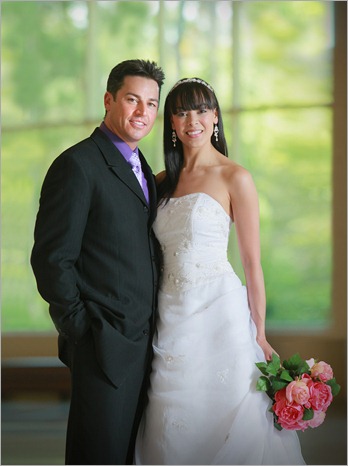 Sometimes I like to post just a simple, easy wedding portrait at DigitalProTalk.com. Why? Because of the thought and technique that went into the image. LaDawn attended David Black's program at Photoshop World last week and was raving about his beautiful images and presentation.

She was telling me how he would show a simple, flat lit, available light image and then make the point that anyone could take that photograph. Then David would show that exact same image but by adding some off camera lighting the image popped off the scene - simply because of exciting lighting. Nothing else had changed.

I think that same point is made perfectly in this wedding image. I could have just pointed the camera at the subjects and shot away with just the available light. Using this technique, or lack of technique, many photographers would have been satisfied with their photographs.

The truth of the matter is the fact that the photographer could have created a much more exciting image for his/her client. Here is the approach I took. First, I want the outdoor foliage to appear darker than the blown out alternative of the simple available light shot. I could only do that by bringing in my off camera flash, camera right which I did in this image.

Using the off camera flash allowed me to use a faster shutter speed at any given aperture thereby darkening the background to the tones I desired. I still wanted the presentation to be a pastel green in hue. Here is how I did it. I metered the background with my camera, then under exposed the background by about two-stops.

Next I had to add the light from a direction that would create a loop lighting pattern on my subject's faces. Shooting through my Zumbrella softened the lighting on the bride and groom's faces that balanced nicely with the ambient giving me a beautiful 3:1 lighting ratio.

You know, a little attention to detail, even on this very simple, easy image can make such an improved difference when compared to so much mediocre wedding photography that permeates our profession. Take the time to make the difference in your own photography.