Today's post is going to be on a more thoughtful note and not photo-centric but I still hope you enjoy the read.

I hope everybody had a great weekend.  The highlight of my weekend was attending my high school reunion.  I know what you're thinking - like, who cares, right?  But hear me out.  Having attended a few of these in the past, high school reunions have never been one of the high points on my social calendar.  Many of you may have the same feelings about high school reunions. You show up, everybody looks a lot older, and still most people haven't changed much, the same cliques are still hanging together, you make a little small talk, and leave promising yourself that that's the last reunion you'll ever attend. 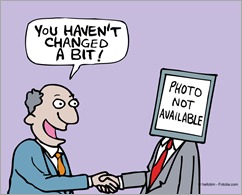 That's how I felt 10 years ago when I left my reunion.  This time things were different though.  Everyone looked way older than the last time.  In fact when, my friend and fellow graduate, Terry, and I walked into the hospitality room Friday night, I recognized only one person - I had no clue who the other 20 people were!

But this year, like I said, something was different. One of the folks at Friday's get together, who I didn't know, immediately came up and introduced himself.  Then one after the other, everyone else did the same. It was a lot different than 10 years ago when only a few in attendance made the effort. Everyone was warm, hospitable and friendly - no more “cliquish” groups, braggadocios conversations, and very little small talk.  Everyone seemed genuinely interested in each other and what each other had been doing for the last several years.  At the end of the evening you felt you had not renewed friendships, but made new friends, friends you would like to see again in another five years or maybe even sooner ;~)

I think the reason for this change was that his time the entire group seemed "otherated" that is genuinely interested in all the others in the room.  This continued through Saturday's festivities too.  Heck, maybe getting older makes you friendlier and a little wiser. This may have been because of the personal histories of so many of the attendees.  Some were retired, some were busier than ever like yours truly, others were enjoying grand kids, GRAND KIDS, I'm not even close to the grand kid stage. But everyone seemed very content, satisfied and really happy with where they were in their lives.

Now having said that, the fact of the matter was, that many would not have a reason to be happy.  A few had lost their jobs. One of our classmates had gone through a horrible cancer operation that had severely and cruelly altered his face.  He can no longer eat normally, and he is very hard to understand when he speaks.  But you know what, he was there all dressed up shaking hands, slapping everyone on the back, and wishing everyone the best.  Another, the first to say HI to us on Friday, had two shoulders and one knee replaced - must have been after the 17 Boston Marathons he had participated in - but he was getting around fine and was now happily retired.  The going joke was that John has his PhD in Psychology and if you talked with him for more that 30 minutes, he would have to charge you ;~)

Many of the classmates in attendance have really become quite successful.  Terry had finished 7 terms in the state legislature, is president of the Board of Reagents at one of our local universities.  He can't retire he says, because his new business he started a few years ago now has 67 employees and operates in several states around the country. Others were at the top of their professions, another retired early from American airlines and spends a lot of time on the golf course. Another classmate who unfortunately could not attend, and the guy that cheated off of me in high school, went on to be a well respected attorney and author.  Another, the tall, gangling, fun loving classmate from years ago now is extremely successful and runs the advertising campaigns for Toyota.

The list goes on and on, but what was most important was how everyone wanted to genuinely connect with everyone else.  We can get so wrapped up in our own lives, we sometimes miss how important it is to be connected, concerned, and interested in other people's lives too.

Hey gang, that's it for me today.  We'll get back to the regular DigitalProTalk lineup tomorrow with a brand new Technique Tuesday for you and some cool new announcements too.

Have a good one and I'll see you tomorrow.