What’s Up Wednesday: Time To Pay Attention To The Small Things

Yesterday turned out to be a fairly busy day around the studio.  The fact that my computer crashed during the posting of Technique Tuesday didn’t help the situation much either.  But, with snow on the ground

and Christmas in the air, the dampened spirits soon evaporated.

Cincinnati, Ohio is quite famous for it’s “Festival of Lights” held at the Cincinnati Zoo and Botanical Gardens each year.  We decided to check it out.  You know, with the holiday rush putting a “strangle hold” on so many of us during this part of the year, you’ve just got to take a “pause that refreshes”.

We did exactly that last night.  And, I have to say, it was a mild winter night and a beautiful holiday experience.  As usual, I grabbed my camera, goosed the ISO to 2,500 and shot away.

Time To Pay Attention To The Small Things

I’ve been running my series, “The One That Got Away” the last few months which everyone really seemed to enjoy – thanks.  I’m continuing the Wednesday posts in sort of in the same vein – critiquing images on how they they might be improved for the client. 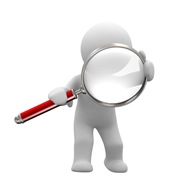 You’ve noticed that most of the suggestions always have to do with the small things that get missed in the rush of the shoot.  That’s the case in today’s image but today I want to expand on the topic even more.

Way too often the shutter button gets pressed far too soon.  Can it be the heat of the shoot, the lack of time to fine tune the image, or simply not paying attention to what needs to be done?  Frankly, I think it’s the latter more often than not.

Hit the “Read More…” link for the rest of the story.

For starters, it’s an OK photograph of a beautiful bride in the lovely surrounds of the country club.  You may be looking at it and saying< “Only OK, I think it’s great.”  At first glance I think I may have felt the same way too. Beautiful bride, good expression, flattering pose, great lighting, nice location – all good stuff, right? 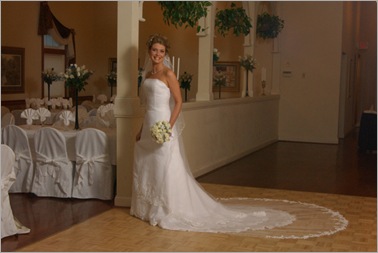 So what “kills” this photograph and how much time would it have taken to solve the issues inherent in the image to really make it a stand out wedding image?  The problem is in the missed details in setting up the shot.

Let me count the ways:

1 – The most glaring short coming of this image is the bride’s shadow falling in the column to her right.

Why was this missed?  Because someone, the photographer and his/her assistant was not paying attention to where the shadows were going to fall at the moment of exposure.

From the assistant’s point of view, he/she should have easily seen that the column was behind the bride.  That meant that when the flash fired, it was definitely going to cast the bride’s shadow on the column. Frankly, the photographer should have caught the problem too by simply checking the LCD screen after the shot.

The quick fix: Move the bride slightly forward and about three feet away form the column – the problem goes away.  Fix time, about 30 seconds.

2 – The second issue I notice are the candles growing out of the bride’s shoulders.  It is both distracting and not flattering to the subject.

The Easy Fix: In the previous fix, we moved the bride slightly forward to alleviate the “shadow” issue.  That repositioning of the bride goes a long way to solve this problem too.  With the bride farther from the candles and the candles further from the photographer, they will become smaller in the scene.  That makes them really easy to hide behind the bride as the photographer should had done in composing the image. Fix time – maybe 5 seconds by lowering the camera angle.

3 – Bride’s right arm is hidden by the gown.  It flattered the subject to see the full length of the arm.  This is really just a finessing of the classical bridal pose.

Quick Easy Fix: When I see this, I simply ask the client to bring their right elbow out slightly till I can see at least part of the entire arm. The mistake many photographers make is, that in finessing the pose, the arm sometimes is brought too far forward.  Remember , just a bit forward still looking natural. Fix time – about 15 seconds.

4 – Too much “non interesting” background is in the frame.  I’m mostly talking about empty space on the right side of the image.  Nothing is happening back there so let’s re-frame up the photo to eliminate it.

Quick Easy Fix: In the first point above, I suggested we move the bride forward about 3 feet and away from the column.  That move would solve a lot of the problem I see.

Using a longer focal length on the lens would help compress the background and go a long way to enhancing the final composition. Lens Fix time – maybe 30 more seconds.

Total time to fine tune the image, maybe 75 seconds – not much time at all to really make the image “sing”.

But that’s my point.  First, learn be be aware of the small things that NEED adjustment, changing, or fixing before you press the shutter button. Or, take a quick test shot and quickly review the image. Then take the few seconds to make those changes and you’ve done yourself and your client a big favor.

It’s always the little things that add up to become a big difference when you take the time to be aware of them.

Hey gang, that’s it for me today.  I’m heading out to do a little last minute shopping today and then a nice dinner with LaDawn this evening.  Hope you scheduled some time off with your family too to enjoy the holiday season.

Plan to check back tomorrow for another episode of Business Day Thursday: Picking Up The Loose Ends Of Past Sales.