Wednesday: Visually Building Up To The Final Image

In addition to announcing our holiday specials today which I’ve done in the above post, I also wanted to give you a peek at how I arrive at my final image.

OK, what do I mean?  While we were in Cabo, I always have a camera in my hands.  Our friend Sarah made the comment to me that she enjoys watching me create my images.  I’ll take the first, recompose slightly and take the second, and continue the interactive shooting process to I get the image I want.

I never thought about it that way, but I think she hit the “nail on the head: as they say on how I see and frame up an image.  In today’s post, I’m going to illustrate that point for you in a session I did of one of our grooms during a recent Master Class.  Let me show you.

Visually Building Up To The Final Image

Let’s look at the first image.  I knew in my mind that I wanted to create a wide angle portrait on the groom in the beautiful surrounds of the church. 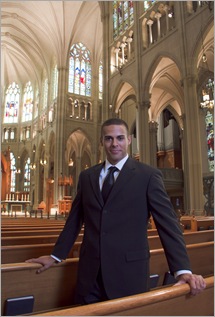 This first image is not a bad first try. But, I am bothered by several elements within the photograph. First, the ceiling, top left, is too bright. Secondly, I don’t like how the arch “hits” him in the head.  And finally, the use of the wide angle lens too close to the subject distorted his arm making it unnaturally long.

Now let’s look at the second image. I think it is a slight improvement but “still no cigar.” 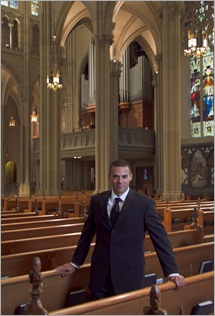 In this image the lighting looks good, pose works, arm is not so distorted.  I positioned the camera at a higher angle which solved my bright ceiling problem. But I still have the problem of the pillar “ hitting him in the head.”

In this image I’m getting closer still.  The pose and lighting are still looking good.  The balance of the ambient with the off camera key light works well. So what’s the deal breaker for me? 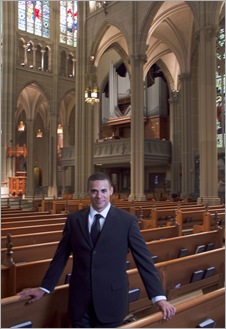 Take a quick look back at the first image.  In that image, I was attempting to frame up my subject within the arch but I just missed. The same has happened for the second and third image.  But you can see I’m a lot closer to my compositional goal in this third image.  All I need to do is frame him up within the “interior frame” behind him.

I think this image “nails it.”  This time the groom’s head is perfectly centered within the “interior frame” (behind his head).  That framing offers a nice visual balance to the scene while at the same time drawing viewer’s attention directly to his face. 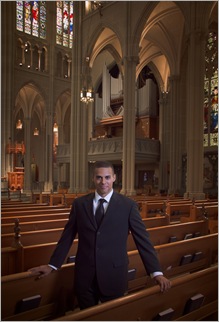 A tweak or two in Lightroom to adjust the light intensities within certain areas of the scene enhanced the portrait even further and gave me my final result.

The total time that elapsed for me to iterate to this result was 2 minutes and 7 seconds.  So from the first image to the last in about 2 minutes illustrates the creative process my mind goes through to obtain a finished photograph with the result I want.

I hope you can understand what I’m saying.  The first shot is never the only shot for me.  As you can see, the final image is a methodical “process” for me.  I like seeing how the image starts coming together as I make the minor changes to the composition.  Each “tweak” leads me to the next and then to the next until I now have captured what I want.

Anyway, I get you could say that my first three images are the ones that got away. But, I hung in there till finally the “bells and whistles” sounded and I knew I had the one I wanted.

Hey gang, that’s it for me today.  Don’t forget to check out the great holiday special over at our Digital Resource Center. With deals from 15% to 40% off just in time for the holidays! You can’t go wrong!

How about I see everybody tomorrow for another episode of “Business Day Thursday: Your After Holiday Sales Booster.”

Have a great rest of the day and I’ll see you then!

All the best, David