Thanksgiving Specials & The One That Got Away: What's That In Your Ears?

It's been another busy day around here as usual. The biggest part of the day has been spent putting together, for the fist time ever, a nice list of Thanksgiving Specials. Here is the deal. we had some great offers during my Captured By The Light 2010 tour and thanks to the good folks at LumaPix, we are able to extend the specials till the end of the month!

Watch the short video below to hear about all the tour specials. Remember, these specials are only good till midnight November 30, 2010 and then they are gone forever!

To celebrate the good news, I've reposted my three Design Webcasts which featured nearly 4 hours of LumaPix tutorials and demonstrations showcasing many of LumaPix's never before seen features. The videos have been viewed over 12,000 times and have received "RAVE" reviews.

You can find the three Design webcasts at our sister site DPTSpecials right here. Get over there right away and enjoy them till midnight November 30, 2010.

OK gang, time to get on with today's post. Today I'm posting another episode of "The One That Got Away". But today, it's one of my images. Why not read all about it below.

The One That Got Away: What's That In Your Ears?

During my CBTL 2010 tour, this image kept coming up on the screen and it was driving me crazy. Why? Because I blew the shot. In my discussion, I was talking about how to survey a location and find the best vantage points to create the best images for your clients. All was well and good till this image popped up on the screen. 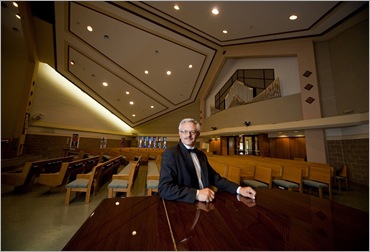 Take a good look at it. First of all what do I like about this image?

1 - I love the leading lines running throughout the entire image. The lines lead the viewer's eye right to the subject. Many of the other lines help frame the subject in the composition as well.

2 - I love the lighting. Its coming in just perfectly creating a nice loop lighting pattern on the groom's face.

3 - I like the balance of the flash exposure with the ambient light. It seems just right and let's the groom project from the scene quite nicely.

So, what's my BIG gripe about this image? Take a look at it again. Do you see how the soffit goes in one ear and out the other? What was I thinking? When I look at this image, it's almost like an arrow through his head.

And, it is such an easy fix. All I needed to do was drop the camera's position slightly. That would have lowered the soffit line enough so that it didn't make that path through his head.

Look at this next image. 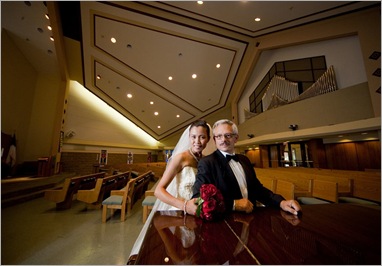 See how in this image, after I asked the bride to join the groom, I was paying more attention to my composition and DID lower the camera slightly. Now the couple's heads are better positioned within the small triangle shape behind them - much better.

It’s amazing sometimes how just a small change can make such a big difference in the final result. Sure, you may be saying it was no big deal in the first image. But it was a big deal. If I was paying better attention to the composition, I would have captured a better photograph for my client.

Would they have noticed? It doesn't matter. If we want to be working professionals which means always putting are best foot forward, we always need to be paying attention to the details. That's a BIG difference between a real pro and someone else who pretends to the title. OK, I'll get off of my soapbox now ;~)

Hey gang, that's it for me today. The rain has stopped after two days and the sun is coming out. It might just be time to take a break and smell the roses. Have a great rest of the day and Ill plan to see everybody same time, same place tomorrow for another episode of Business Day Thursday: Crowd Sourcing For Your Small Business. Uhmmm.... that sounds like a weird title for a post. You'll have to check in tomorrow to see what I'm talking about. Hope to see ya' then.