I'm just checking in with you to give you the latest update on our road trip progress. Kent left Columbus and landed at our home about 10:00a.m. to pick me up. After packing the jeep, we were on our way by 10:15 a.m.

Our route would take us down to Louisville, KY then across the Ohio River over this “caterpillar look alike” and up to St. Louis, MO. 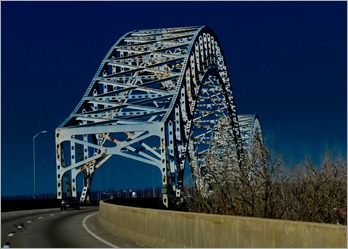 That part of the trip was pretty uneventful - lots of fairly lonely road as we drove through Hoosier National Forest. Even though there were no leaves on the trees, it's still a pretty drive.

The air was a crisp 29 degrees and the sky was blue - not a bad day for a drive. The leafless trees really stood out against the crisp clean air. The colors were mostly gray against blacks but, I still think offered the occasional opportunity for a photograph.

The Ride In A Baja Jeep

I have to tell ya', I didn't know what to expect in driving a Jeep cross country. Turns out a lot of my initial negative expectations have been put to rest. Ever with the 35 inch tires, jacked up frame, and stiffer off-road suspension, the ride is reasonable comfortable. 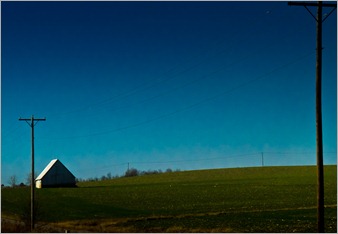 The only negative issue is the cabin noise. Below 65 mph it's slightly noisy but not too bad. Get the Jeep cranked up to a more normal 70-75 mph and things get a lot noisier. You kind of get used to it after a while but you still have to talk a bit louder to each other when conversing.

Kent And I Both Have Gas Issues

Our first surprise came when we filled the Jeep up for the first time - we had only managed about 10 MPG - not good when you are planning to make the Baja run with one point between gas stations being about 300 miles long. A 20 gallon tank of gas at 10 mpg is not going to let you make it. 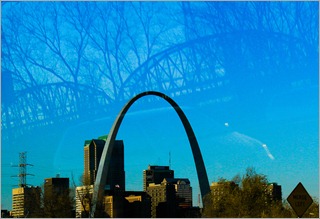 We decided that the readings were wrong and that we would hope for better on the next fill up. The second fill up near St. Louis, MO yielded only slightly better news. This time around we managed 13 mpg - still a problem for the long Baja stretch of gas less highway. We are working on plan B as we work our way across the country.

That was our original deduction about the gas issue but it turned out to be a non-issue after were did about 50 miles of testing as we sped up the road. The odometer was only reporting slightly differently from the actually mileage travelled - really not enough to be concerned about. So the MPG issue is still with us.

In the rush to get out the door in Cincy, I forget to gran the iPhone car charger – not good.  That meant finding a Best Buy on the way to pick one up. The minute we checked the “Around Me” iPhone app, we found we were about 2 miles away from one. We made a quick gas stop and headed to Best Buy less that a half mile away.

It was madness!!!! Kent pulled up onto to the curb and I jumped into the store – still crazy!!! I quickly befriended one of the clerks who helped me find what I needed, checked me out with a free cash register, and I was out the door in no time.  Still, I’ll leave the Black Friday shopping to the PRO shoppers ;~)

And I don't mean like in "beautiful sunset" either. I mean killer, blinding, burn tour retinas out sunset. We refueled around St. Louis, made our slight left hand turn from I-64 onto I-44 and pointed our Jeep west to Tulsa, OK. It looked like about 5 more hours before we were going to call it a day.

Our timing was perfect - we hit a little traffic in St. Louis but it wasn't too bad. About an hour or so west of St. Louis the sun was getting closer to the horizon. Between car visors and ball caps we managed to avoid total blindness heading west.

Still the sun began to settle even lower on the horizon and there was a cloud to found anywhere in the sky - the view began to get blinding. I was driving and for a few moments, the sun was so bright, I had to slow slightly just to keep my bearings. 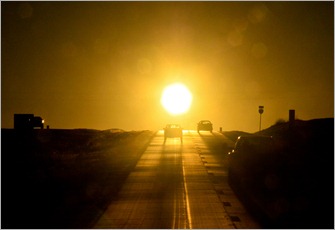 At one point the sun settled directly over the road directly ahead of us. It looked like a giant unrelenting fireball daring us to continue. And continue we did for nearly 20 more minutes before we finally got some relief as it settled below the horizon line. The experience gave an entire new meaning to the term "sunset".

We were temporally slightly blinded for several minutes and had to pull off the highway to see how to turn on the headlights. A few minutes later we felt pretty much back to normal - whew!!!

Pulling In For The Night

After a few more hours and. checking our Google Maps one more time, we decided that the time and miles to Tulsa was a bit too far to cover. We would have arrived about 9:30 p.m. - 10:30 p.m. EST - so we decided to pull over at Springfield, MO. 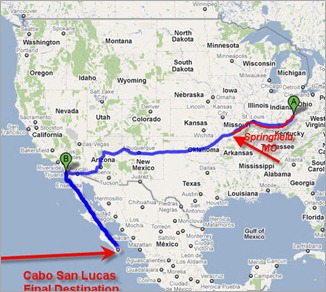 Finding a decent hotel is always a slight challenge on these kinds of road trips - no reservations, higher than normal room rates for walk-in's, etc. A quick check with my iPhone using the "Around Me" app had several hotels on line in no time. I made a few calls and as luck would have it, the Doubletree Hotel had much better rates than the other holiday Inn Express, Hampton Inn, etc. plus the Doubletree is a MUCH nicer hotel.

We parked the Jeep, grabbed the bags, and checked in - ahhh.... don't you love those Doubletree chocolate cookies ;~)

After a very lazing stay at our hotel, we are up bright and early this morning and hope to hit the road about 7:30 a.m. Today the plan is to try to make it to Albuquerque, NX - about 830 miles, just a drop in the mileage bucket ;~) 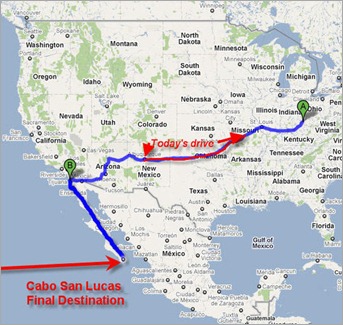 If I get a chance today, and there is any blog-able news, I try to get a post up while on the road. I've been wanting to give this a try anyway. Let's see what happens.

Anyway, that's it for me this morning. Hope to see you back here again later today. Have a great one and Ill see ya' soon.

p.s. LaDawn is NOT editing any of these posts so I make no guarantee of spelling accuracy, etc. ;~)  -David