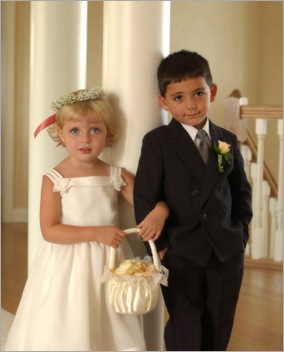 Here is another image made early in my digital career.  By this time I had switched to shooting the Nikon D1x camera – it was just a lot more robust than the Fiji S-1 Pro I referenced in yesterday's post. Boy, back in the day, you owned a Hasselblad camera for most of your entire career.  Now we need to change out our digital cameras after 18 months to keep up with the new technologies.  Things sure have changed, haven’t they?

Anyway,  This image was made as I was standing around waiting on the bride to get ready.  We had arrived early to the bride’s home, as usual, so we could check out the “lay of the land” and be sure we were well prepared for our shoot.

These two little kids, brother and sister, I think, were ready to go.  I love photographing the kids at a wedding. You have to take a gentle approach so as to not alarm them as was the case here.  The little girl was especially shy and it shows in this image.

Still I wanted to bring them together in a nice image.  The little boy was leaning against the column so I helped the little girl place her arm around his, hold her basket, and hoped they would stay together long enough to get the shot.

I think the expressions are priceless in this image and love how the final image.  I also have several other great images of both children who turned out to be about the best little models in the world.

Lighting was from two sources.  The main light was coming in camera left from an open door.  The large light source bathed both children in this beautiful soft directional light. The “kick light” from camera right falling on the back of the little boy’s head was from a window just down the stairwell as seen in the distance. All came together for a great image that everybody loved.

Camera specs: Nikon D1x fitted with the “rare” 50mm F 1.4 lens at F3.5 @ 1/60 second. (I say “rare” because almost nobody thinks this lens is good for much of anything and it goes unused so often.  Actually it’s a great available light portrait lens for instances just like this) ISO 400.  Enjoy!  -David