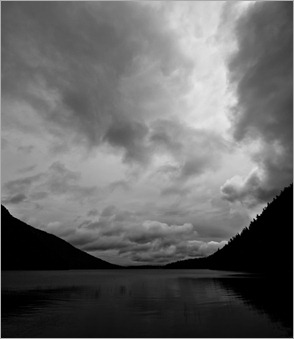 This image was taken on a recent trip to Bar Harbor, Maine.  We had arrived at the Jordan Pond House just as the storm was clearing and walked the trail around Jordon Pond.  About half way around the pond at the far side, this vista presented itself to us.  It was an amazing scene.

With camera in hand, armed with a super wide angle lens I grabbed a few images of this spectacular site. I purposely centered on the lowest point between the two mountains – I like how the distant clouds seemed to just settle right between them.

I also love the subtle backlit turbulence of the clouds above as they race to the edge of the frame.  The subtle interplay of tonalities of the grey tonalities, whites, and blacks offer the viewer a sumptuous B&W image.