"An Easy Day At The Park" 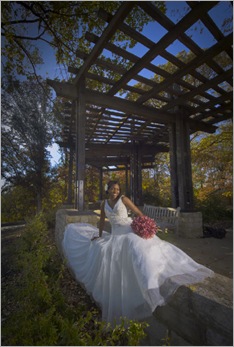 "An Easy Day At The Park"
©David A. Ziser

Here is an image I captured during my Master Class last week. I love those wide angle lenses, and for me the wider the better. This is the widest angle lens you can put on and APS size sensor.

The super wide nature of this wide angle lens really accentuated the convergence of the lines in this image which I like a lot.  I would have preferred to see a bit more of the right side of the image, but was hampered by some distracting elements which I decided to crop out – not a big deal though.

A tweak or two in Lightroom enhanced the sky a bit adding a little more dramatic color to the scene.  I also even like how the cool shadows in the shadows of her gown compliment the sky color.

The lighting is coming in from camera left – Quantum Trio on full power – illuminated the bride nicely and really helped to pick up the detail in the bride’s gown.