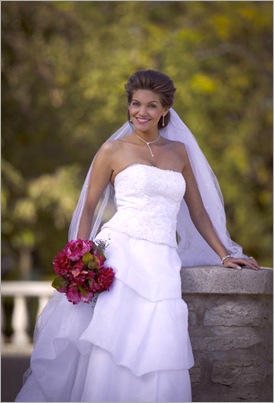 Here is an image I made during this week's Master Class.  It’s just a simple, elegant photograph of the bride outdoors in the park – or so it seems.  The fact of the matter is that she was standing in an area of the park that was flooded with direct sunlight.

We wedding photographers are challenged with less than perfect lighting conditions every weekend. Part of the fun of shooting weddings is how we handle the challenges.

Here’s what I did. The area behind the bride was quite a distance away.  I knew I could use a large aperture and really throw the background well out of focus. What about the direct sun – that was easy.  The sun fortunately was coming in from camera left at about a 45 degree angle to the bride – about the same location I would position a studio light.  The problem was the fact that the direct sunlight was quite harsh.

If I could place the bride in the shadow of my large umbrella, that should solve the problem.  The light would be softened while still giving me a nice direction of light on my bride that I wanted.

Another benefit of placing the bride in the shadow of the large umbrella was the fact that I would need to open up the exposure by two stops to maintain proper exposure on her.  That meant that the sunlit foliage in the background would be 2 stops overexposed pushing their color tonalities to a more pleasing pastel tone. With the background being so far out of focus, that should give me a beautiful backdrop to my bridal portrait.

I positioned the bride and shot away.  I think I captured quite a lovely image of our bride in much less than perfect lighting conditions.  Hey, that’s the job of a good wedding photographer, right?

p.s. Class starts in a few so look for my regular post later today.