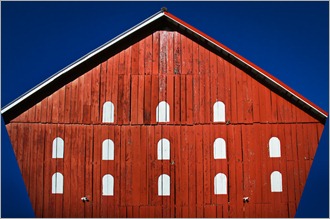 The original image was captured while we were spending the weekend in the Rockville, Maryland area.  We made the drive out to the Sugarloaf Mountain Winery and enjoyed the sites along the way.  This old barn housed the tasting room of the winery.  I loved the rich red color punctuated by the white painted “windows” against the deep blue sky.

The “funkiness came later after I imported the image into Lightroom 3 and ran the “Lens Correction” adjustment on the image. I removed the convergence of the vertical lines from the image, but I did not constrain the crop.  The blue left and right areas under the peaks of the barn were left white.

I thought, “What would happen if I imported the resulting image into Photoshop?” The image imported with the white areas in tack. A quick sample of the blue sky together with the “Paint Bucket” tool allowed me to pour the “Blue” into the two white areas.  The result was a sort of funky, fun image of the barn.