Business Day Thursday: How Do You Talk About Your Competition?

We landed in Charlotte yesterday early afternoon - I could smell that great southern barbecue from miles away;~) I hope we get to sample some of those fine fix ins' before we head out of town today - yummy! Hey, Bubba [link], here we come ;~)

Last night ended our 4th leg of our travels with lots of super friendly photographers enjoying the presentation.  We did have a few “hic-cups” – you won’t believe!

We landed about 2:00 p.m. in the afternoon and saw that the hotel room was set in the wrong direction – it needed to be rotated 90 degrees.  No problem, I think every hotel staff member stepped in to make it happen as quickly as possible.  Hic-cup #1 solved and the room looked great.

The bigger surprise came about 15 minutes into the program.  The audience was locked to their seats and I was telling a story about a little flower girl hesitatingly making her way down the aisle.  She stopped, looked back at the bride reluctant to continue.  The bride gently encouraged her to continue down the aisle – mommy and daddy were waiting for her.

The audience was hanging on every word of the story as I showed the images up on the screen.  And then it happened – the fire alarm started to scream it’s super loud emergency blare throughout the entire hotel!

I thought it would stop but the repeated screams of the alarm continued – we were all expecting relief which never came.  Instead we were asked to quickly evacuate the building – yes, evacuate the building!!! Do I grab my camera, flash and computer or just leave them sit and hope this is just a false alarm.  I chose the latter and left the items behind. 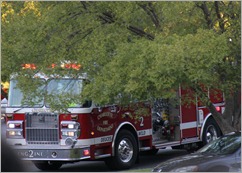 Once outside we could hear the sirens and see the fire trucks arriving – I knew I should have grabbed my gear!! The fireman entered the hotel with all their safety gear – we  waited patiently outside hoping for the best.

A few minutes later, the firemen returned assuring everyone that everything was OK. Turns out one of the pasta stations from another event had set some of the table decor ablaze, but only ever so slightly.  Everyone was relieved as we all entered the building, and got settled into for the rest of the program.

We all caught our breath and I began again.  2 minutes later – the fire alarm again, evacuation again, what was it this time?  We think a false alarm from residual smoke of the pasta station.  Ten minutes later we were back in the meeting room once again.  The rest of the night proceeded normally but boy, do we have a story to tell about our Charlotte stop.

Some of our sponsors were even having “fire sales” on some of their merchandise in the foyer ;~)  Anyway, the evening ended just fine, albeit a little late but nearly all 200 attendees stayed till we finished.  Hey, it’s just life on the road – a surprise around every corner.

On with Business Day Thursday’s post. Just hit the “Read More…” link below for today’s topic.

How Do You Talk About Your Competition?

In Atlanta two evenings ago, we were relaxing after the program enjoying an adult beverage or two in the hotel lounge. It's nice to visit with the volunteers and get their take on the program. Anyway, two of our volunteers, Matt and Kristina and I were discussing the process of searching for a wedding photographer in today's market. Matt and Kristina, as it turns out, are engaged to be married, and are in the middle of planning all their wedding plans.

What struck me was their remarks about their experience at a recent bridal show. They remarked about the apparent lack of professionalism from many of the photographers they encountered at the show. They felt most photographers never really engaged THEM about THEIR wedding plans. The conversations were mostly about the photographer themselves or putting down the competition.

That got me thinking about today's topic. Why would anyone ever trash the competition or even talk negatively about them at all? It’s about selling YOUR product and service to the prospective client, isn't it? Trashing the competition is counter-productive to that goal.

I still hear similar "trash" remarks about my business occasionally in Cincinnati, Ohio - remarks like, "He's too expensive. You can get somebody cheaper." These remarks came from a bridal consultant that I, on the rare occasion, share an event. This same consultant has a reputation for putting down her own competition in her own field too - pretty sad.

To me, trashing the competition would better be called "brain dead marketing". Am I ever going to recommend this consultant to any of my clients? I can assure you that I am not - ever! By trashing your competition, you basically close the door on any referral business coming from the person who was trashed. That just makes no sense to me. The bottom line is that it is just bad business to trash anyone to a perspective client.

As I built my business, I always made it a policy to talk positively about my competition all the time - no exceptions. I even had several of the LOCAL photographers attending my Master Classes. I really never cared that I was teaching them my "tricks of the trade".

If I was ever booked up on a weekend, I would recommend the caller to a photographer whom I thought would do a good job for them on their wedding day. You know, I think my "competition" enjoyed the positive nod from me. My policy, in addition to being totally professional, also created a nice relationship between myself and my competition. 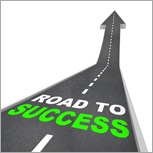 In fact many of those relationships created quite a bit of referral business TO ME from my "competition" - not a bad deal. You know, if people know you respect them, they will return that same respect. And having the respect of your competition in just plain good for business.

Regardless of where you are in your professional growth, be sure you always offer your respect to those who deserve it. To those who don't, just stay "mum" on them. Like my Mama always used to say, "If you can't say something nice about somebody, then just don’t say anything at all."

Hey gang, that’s it for me today.  We slept in this morning and are planning an easy drive to Washington, D.C. We should get in sometime early this evening.  It’s been a great run this week, but we are really looking forward to our long weekend in the nation’s capital.

Why don't you plan to stop by tomorrow for another scintillating post here at DPT.  Hope to see you then,

Have a good one and I’ll see ya’ then,  David