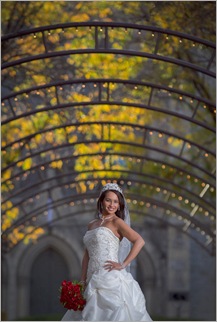 Here is an image I made during yesterday’s Master Class on-location shoot. It illustrates just how nice a bridal portrait can look with a little off camera flash coming in from camera right. Using the wider aperture of F4.0 threw the background out of focus thereby making my subject, the bride really “pop out” of the scene.

It was a bit challenged to keep the aperture at F 4.0 because of the brighter ambient light outdoors.  I decided to “cheat the sync” to 1/320 second to make the F 4.0 aperture work.  At the higher than normal sync speed, that meant that 1/3 of left side of the image received no flash.  But, no problem, since my subject was not standing there.

I also like the contrast of the warm fall colors against the “grey” of the building in the background. The simple centered symmetry worked well for this simple, elegant bridal portrait.