Gear Bag Friday: The Stuff At The Bottom Of The Bag

Good Morning Everybody,
We've got one more trip planned bright and early Sunday morning. LaDawn and I are heading to Phoenix for the Imaging USA convention. This is a great show and I hope to run into some of our DigitalProTalk readers out there. You can find me running through the trade show most of Sunday, Monday, and Tuesday. So if you spot me, come on up and say HI.

Gear Bag Friday: What’s At the Bottom of the Bag
Well, I am literally scraping the bottom of the bag today, so what else is in here? Yes, folks for a photographer my age probably the most important thing in my camera bag are the Advil and the Celebrex tabs ;~) In all seriousness though, there are a few things left in the bag that are cool little gadgets, many of which have been with me for many, many years. These items are often never rarely used, but still I like having them in the rare occurrence I pull them out and play around with a different playful exposure. Let me go through the quick list.

1 -- A tube of mirrors, otherwise known as a Spectral Highlighter - and you can find it on the Internet most anywhere. This is a piece of gear I've been carrying with me since the mid-80s. We used to use it to create a spray of color around the wedding rings which I used to position the rings in the bridal bouquet. I occasionally use it these days when photographing the bar mitzvah sign-in board -- it's a way for me to spotlight the special sentiments that the guest has written on the board.

3 -- The “Ray-burst” filter is another filter that I used on every event in the early days. I've been pulling it out every now and then just to add one giant splash of color to a party image.

4 -- Close-up lenses - I really don't use these much at all anymore since I picked up my macro lens about a year ago. But, if you went cheap solution to capturing close-up photographs, and inexpensive set of close-up filters these filters fit the bill nicely.

5 -- Did I mention as Z-ray? Yes, it's true my Z-ray flashlight now has a very special place in my gear bag. I also carry my minis Z-ray which is just a smaller version of the larger tungsten flavor flashlight. The mini Z-rays have been previously featured in posts on DigitalProTalk.com just a few weeks ago when we were in Mexico. Their light output is created by a number of LEDs in the units head. These LEDs luminate at a much bluer color temperature. I suggest shooting them on your cloudy day setting or a Kelvin setting increased up to at a least 6000 K. 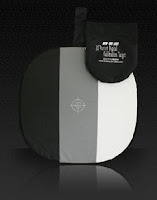 6 -- 14in Digital Pocket Target [link] designed and patented by my good friend and buddy Ed Pierce. This comes in handy whenever you need to set a quick custom color balance or need to e-mail your exposure quickly.

7 -- And miscellaneous items including spare sync cords, ballpoint pen, spare battery for the camera and charger, business cards, model release forms, a few heavy duty rubber bands and a few other things have just been floating around in there for years.

This covers pretty much the camera side of things. Next week I'll wrap with a few more items to round out the series.

Hey gang, that's it for me today. Laundry to do, bags to pack – again, and another plane to catch. As I said, I hope to see some of you Phoenix -- just come on up and say HI. See you in Phoenix, -- David
Posted by David Ziser at 8:00 AM