"Friend Of The Arts" 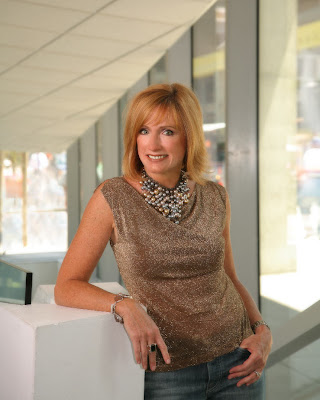 "Friend Of The Arts"
©David A. Ziser
I made this image very quickly, approximately 15 minutes, a few years ago of this beautiful woman at the Contemporary Arts Center in downtown Cincinnati, Ohio. She had generously volunteered of her time and talents for the organization and was being honored as one of the inspiring arts volunteers in the city of Cincinnati, Ohio. I positioned her within the scene opposite the vanishing point. The diagonal lines converging to the left side of the scene would define the vanishing point. With her on the opposite side of the vanishing point, the viewer’s eyes are easily led to her. Because I was working in a downtown Cincinnati location there were quite a lot of distractions outside the plate glass windows seen behind the subject. I needed to disguise pedestrians, cars, buses, power lines, and anything else that would have distracted from the photograph. I accomplished this in two ways. First by using an F5.6 aperture in conjunction with a fairly close working camera distance to the subject to throw most of the background out of focus. Secondly and more importantly, was to overexpose the background substantially. This placed most of the blurred background tonalities into a medium to high key light level. These brighter tonalities, when blurred, really didn't distract from the portrait of my subject. Lighting her was achieved by using my off-camera flash shooting through a translucent umbrella, which was positioned to her right. This put a flattering, classical loop lighting pattern on her face. The ambient light within the museum supplied the fill illumination to the shadow side of the face. I love the finished result. Camera specs; Canon 5D fitted with 24-105mm IS lens at 73mm, F5.6 at 1/125 second, ISO 400. Enjoy! -- David
Posted by David Ziser at 11:09 AM