That's right, David Ziser used one off-camera flash to create a record number of light directions on the scene!!! OK - already with all the hype - I just wanted to see what it looked like in print. I don't know if I set any record or not, but I did managed to light this image with only one flash! So you say - OK, Mr. Ziser, How did you get a back light on the subjects along with that very nice loop lighting pattern on their faces, and get the ambient balanced perfectly as well?? If it's only one flash, then you must have used some "Smoke and Mirrors" for the shot. Well, you would be half right if that's what you thought - smoke - NO; mirrors - YES.

Here's what happened. I was taking a back-lit image of my couple - my assistant was lined up directly behind the couple holding my Quantum T5d set to half power. My camera was set to F5.6 - my favorite aperture for this kind of shot. 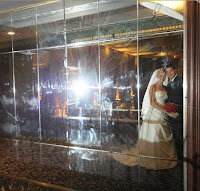 The shutter speed was set to a fairly slow 1/15 second in order to pick up the ambient light in the hotel. After making the first exposure, I got my desired back-lighting effect, but I noticed something else as well - light was falling on the the front of the subjects - where was it coming from? After a quick survey of my working space, I noticed all the mirrored tiles covering the wall next to me. It seems that the light from my assistant's flash

not only gave me the back-lighting I wanted but from the light's point of view, it was also able to track a path that passed the bride and groom, reflect off the mirrored wall and illuminated the couple from the front via reflection. Aha!!! I thought, back-lighting and front-lighting in one easy exposure with only one off-camera light. I turned the couple back towards me, arranged them in a comfortable, pleasing position and made the final shot. I got just what I wanted - a great image of the bride and groom with a nice direction of light creating my favorite loop lighting pattern on the couple's face. No smoke, just mirrors, and a nice image. 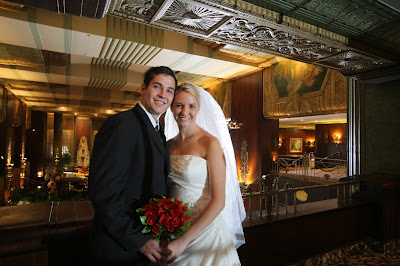