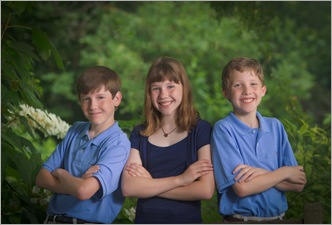 "The Three Amigos"
©David A. Ziser

Here is an image I made during a portrait session we did yesterday morning.  I'd like to say we had the perfect day for the shoot, but that was only partially true - we were dodging a few raindrops during the session.  The rain did let up just enough for us to get some great shots of the family though. I love the overcast cloudy weather for portrait shoots.  The colors just seem more saturated and rich in the final image. Also, when shooting on an overcast day, it is super easy to get great light on the subjects with an off-camera flash.  The overcast day also let's us shoot at a slower shutter speed and wider aperture and that really enhances and softens the background.  Anyway, that was how the day presented itself to us for our portrait shoot yesterday.  This image is one of my favorites from the shoot.  I just asked them to strike an easy pose with their arms folded. We've got great expressions on all the faces, the lighting looks terrific and defines and separates all the three subjects nicely from the background, and the background recedes softly into the distance. Camera specs: Canon 7D fitted with 70-200mm IS lens at 80mm, F 4.0 @ 1/125 second, ISO 400.