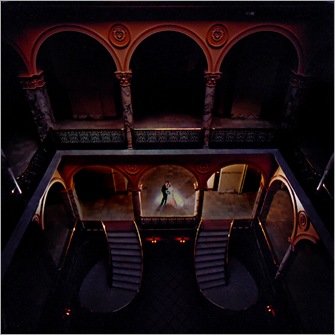 I posted this image way back in the early days of DigitalProTalk before I was giving the back story on the images. I thought I would revisit it again today. This image represents one of my all time favorites. This is a film image, I believe from around 1988. We received permission to shoot in the Monroe County office building, one of the most beautiful buildings in Rochester, NY. The setting was one of the most dramatic I had ever seen. It was lunch hour and not a soul was in sight. I positioned the couple on the second floor and I headed up to the 4th floor – what a view through my wide angle lens. It was quite bright as there was a skylight directly above us. The challenge was to get the brightly lit building to render much darker than normal. That meant using a fast shutter speed and smaller aperture than I would normally use. Once the exposure was determined for this setting, I had to make the bridal couple pop out of the scene. This was accomplished with one strobe positioned behind them. I also had my assistant holding a flash and hiding behind the pillar just to the left of the couple. Flashes were triggered by radio and the rest is history – one pretty photograph. Camera specs; Hasselblad fitted with 40mm Distagon lens, F8 @ 1/500 second, Kodak Vericolor 400 film. Enjoy! -David

p.s. Hey gang we are just getting back in town and I just had time to get this image post up. Look for the regular post tomorrow. Time for an adult beverage;~)