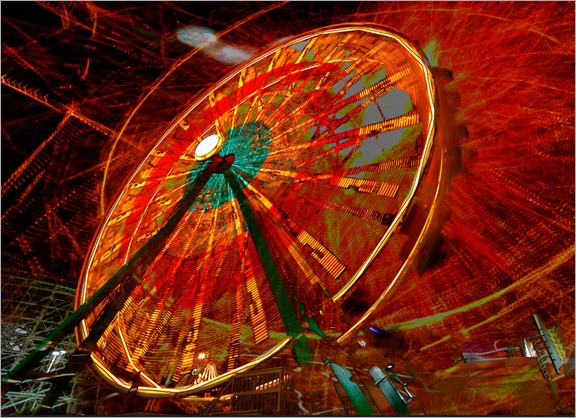 After getting yesterday’s very late post up on-line and a quick bite to eat, we headed down to a small amusement park in the heart of Myrtle Beach. There are two such areas here in the city, The SkyWheel and Family Kingdom. I have been eyeing both since we arrived hoping to head down after dark and try some more HDR shooting.

It was about 10:00 pm when we arrived.  I set up the camera on my tripod – I wanted to capture some of the motion of the rides – framed up the shot of the Ferris wheel and began making exposures. I quickly found that I preferred the longer exposures to the shorter one. After a few tries, I was getting exactly what I wanted.

In this photograph, even though the camera was on a tripod, I must have fired the shutter with a little too much finger force and shook the camera during that first exposure. In spite of the camera shake, I love the result.  The extra “shake” is what added the “wildness” and chaotic feeling to the image.  Add to that the the motion blur, all the wild colors, and the “out the of register” 1st image and I got a great abstract image – much more exiting than the standard long exposure amusement park shot – I like this one the best ;~)

The Rest Of The Story

We were set to move though the midway and enjoy our HRD evening.  15 minutes into our visit and two minutes after I took this photograph, the announcement came across the PA that the park was closing – WHAT!  We just got there. I worked quickly to get off another photograph or two of the Ferris wheel.  I framed up the next ride just as the lights started to be turned off all over the park – rats.

I suggested to LaDawn that we walk the sixteen blocks up to the SkyWheel, surely they would be still be open on this very busy Memorial Day Biker Weekend. We headed up Ocean Drive and 25 minutes later were nearly there.  In the near distance, I could see that the SkyWheel was shut down too, oh no.  We both smiled to each other, turned around and headed back to the car.

By noon earlier in the day the Myrtle Beach streets were backing up with bikers from all points north and south.  By 10:30 pm it was pretty much gridlock.  I have to admit that some of the  bikes were decked out with beautiful metallic paint jobs and colorful neon light treatment.  This was the weekend to show off your bike and is one of the top events in Myrtle Beach. I’m glad to say we felt like we were in the middle of the action.

I’m just wondering about the effects of all the second hand exhaust fumes to my lungs ;~)  Anyway, I did get a few cool shots and we enjoyed our walk back to the car chatting up a few of the revelers on the way – it was a great evening!

Hey gang, that’s it for today.  We head for the airport in just about an hour and then returning home later this afternoon.  I hope everyone enjoys our Memorial Day weekend in your part of the world. Stay safe and remember our veterans and service men and women around the world.

Have a great weekend everybody.  I’ll see you back in Cincy on Monday.