"Looking For Love In All The Wrong Places" 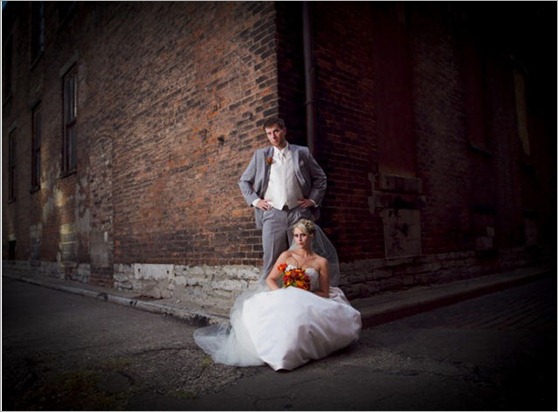 "Looking For Love In All The Wrong Places"
©David A. Ziser

I’ve previously blogged this image but I still like it and thought I would bring it around again. The bride was hoping to shoot at Fountain Square, one of our most popular venues for Cincinnati city images.  Cincinnati was hosting their Oktoberfest celebration over the weekend and due to the large crowds put Fountain Square off limits for photography.

I had mentioned an even more urban location in which we had photographed earlier and she jumped at the idea. We were about 5 hours into the day’s pre-wedding photography session – yep, a long day -and now were headed to an alley at 8th and Plum in downtown Cincy.

We only had a few minutes to work because we were now beginning to run out of time and needed to be heading to the wedding venue within a few minutes.  I had an idea in mind, and I need to say, this was NOT a typical “David Ziser” wedding portrait, but I was looking to try something new and different.

This is one of the images from our “urban” shoot.  With the bride sitting on the curb and the groom straddling her, and both of them with somber expressions, it reminded me maybe of Bonnie and Clyde on their wedding day ;~)  Anyway, it was fun and the couple loved it.

Lighting (150 w.s. or full power) from Quantum placed camera left and shooting through my Zumbrella gave me the directional light I wanted.  Ever so slight tweaks in LR3 finished the image.