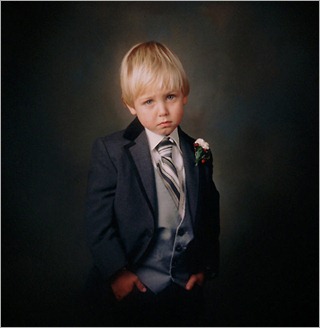 This is one of my favorite and most lasting images I have ever taken over the years. We were set up in the church basement during the reception – portrait background and lights in place.

I remember trying to get young Nicholas to smile and he just would have nothing of it. Even his dad was tying to coax him from behind my camera - still no luck. Finally his dad ordered Nicholas to do what he was told. He defiantly finally pushed his hands into his pockets, said “No”, and pouted back. I hit the shutter, and knew I had the shot.

Nicholas is now in his mid twenties and has his own little "ring bearers" running around the house. I had not seen Nicholas in 22+ years, but his fiancé call and both she and Nicolas came by and interviewed me to photograph their wedding. It would have been great shoot my most famous ringer bearer as a groom.