Wednesday: F-Stops? No, Not For Me!

Ralph, Kent, and I were sitting around recently reminiscing some of the great experiences we have had teaching at the numerous photography schools around the country.  All three of us have been in this profession for quite a while and have heard just about everything.

Ralph's story was the best though.  He was telling of a time last year while teaching at Texas School - LaDawn and I were teaching there at the same time and BTW we’ll all be there next year too.  Ralph enjoys teaching the beginning portrait class because, as we all agreed, of lot of new shooters are perfectly clueless, when it comes to knowing anything about the CRAFT of photography.

Ralph's story says it all.  He was approached by a student who asked him to review a few of the student's portrait images. Ralph tells how he looked them over and saw the the F-stop the student used was far to small and put everything into sharp focus.  Ralph suggested the student use a larger F-Stop to get the benefit of selective focus for his subject. 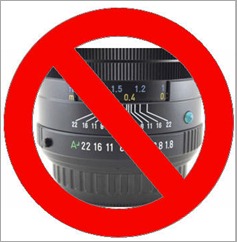 The student was taken back and looked completely confused by the remark.  Ralph quickly noticed the reaction so he asked straightforwardly, Well, what F-Stop did you use when you made these images?". The student quickly answered, thinking he was above it all, "F-Stops?  I don't even use f-Stops!". His answer says it all.

I’m not trying to get up on my soap box here, well, maybe a little, but that type of attitude is more prevalent with today's new digital photographers. In years past when one used film one really needed to know and understand the workings of their cameras. Digital has made it easy to capture acceptable images. Many ways this is a good thing and in many ways it is not.

We also looked up to, respected, and admired our instructors.  There was a lot less "know it all" attitude floating around back then compared with today, I think.

Don't get me wrong, I’m VERY honored that my DigitalProTalk readers take the time to read my posts.  I'm thrilled when I see young photographers like Jody and Zak Gray, Blair Phillips, and so many other  new young guns, who expend the necessary ongoing effort to attend seminars and conventions, read books to improve their photography, sales, and business building skills.  Those guys got it right and I am one of their biggest fans.

It’s too bad a few others think it is OK to express themselves by breaking the rules, and just doing their own thing.  Hey, I'm OK with breaking the rules too, but you know what, you've got to know the rules before you break them otherwise you are just taking a shot in the dark, hoping for the best, and may even get lucky now and then.

Now for a little confession

Early on, I was one of those "know it all's". Thankfully I got over it early in my career and became an earnest student of the photographic masters in the field.  In fact I still am attending as many seminars as I can each year.  I hoped I've learned a little over the years which I'm trying to pass on to you here at DigitalProTalk.

I did a post a number of months ago entitled: "Are You A Good Student Or A Bad Student?"  It speaks to my coming of age as a student in those early years.  You may enjoy the read again right here.

Hey gang, that's it for me today. The sunshine and Cabo breezes are calling so I'm on my way.  Plan to stop by again tomorrow for a very fascinating Business Day Thursday: Time To Cut Your Prices In Half.  Hope to see you then.