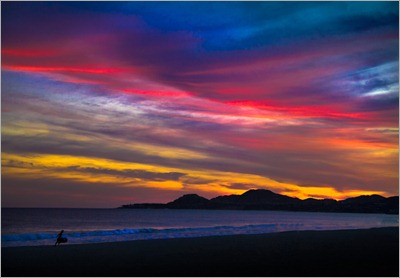 I headed to Javier's Restaurant ahead of the others to get a ringside seat for the evening's light display.  I was not disappointed.  Although not spectacular, the sunset was still a beautiful display of color over the Sea Of Cortez.

I had made several images, ranging my exposure and crops for various renditions of the scene.  I got several keepers but this one was one of my favorites.  Just as I was about to make an exposure, I saw a young boy carrying a surf board running into the bottom corner of the camera frame.  I decided to wait a split second more till he was more prominently positioned in the frame.  There was the shot - hit the shutter and I knew I had image I wanted.

Into ACR for a little tweaking of the colors. Sometimes timing is everything.