I sure hope everyone had a great weekend in your part of the world.  The highlight of our weekend was working on the the Help-Portrait project.  The goal of the Help-Portrait project, which I've featured here at DigitalProTalk many times over the last several weeks, is to bring portraits to folks and families that could not afford or even thought of having a portrait made.

We worked with the Christian Mission Church in San Jose Del Cabo. The Mission Church helps and supports some of the poorer families in the area and, I have to tell you, from the families that showed up they sure were excited to have their portraits taken. 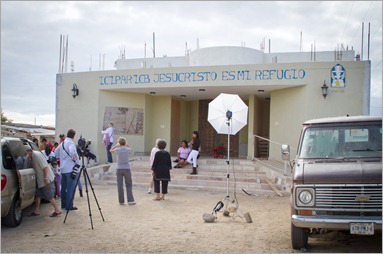 Wanting the portraits to be especially nice meant bringing along lights, light stands, Zumbrellas, reflectors, tripods, and iPads. iPads you say – yes, so that the families, particularly the children, could see the results instantly.

Our goal was to make these portraits as beautiful as those we would take at our own studios. That meant that we had to consider lighting, background selection, and flattering posing of our subjects. 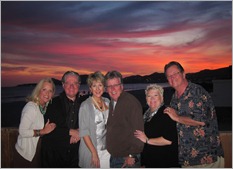 We had six people on the job – Kent and Sarah Smith from Kent Smith Photography (Pickerington, OH): Ralph and Cindy Romaguera from Romaguera Photography (New Orleans, LA: and LaDawn and myself from DigitalProTalk and David A.Ziser Photography (Edgewood, KY).

Fortunately we selected an earlier time of the day to do the portraits. Part of the reason for the morning shoot was the fact that Ralph and Cindy had to catch a plane out of Cabo later in the afternoon. The morning shoot gave us the opportunity to have as many as possible participate in the project. Over the several hours that we were together we got some great images.  Here is a quick re-cap 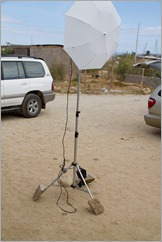 Kent had just picked up a new Paul Buff Einstein 640 w.s lighting unit and a Vagabond battery power supply. This gave us plenty of firepower for our outdoor portraits in a fairly brightly lit part of the desert. Fortunately, at that time of the day (9:00 – 11:00am) we were shooting into the front of the  church which luckily was shadowed during our session. The wind was blowing so we added a few rocks, a little weight, to the light stand ;~)

Also, we were lucky that the church had just installed the brand-new front doors which offered a beautiful, natural background for our portraits. We all were shooting Canon so we selected one of the 5D Mark II’s, attached a 70–200mm IS lens, and locked everything down on Kent’s tripod.

Kent also attached his Canon WFT-E4 IIA wireless transmitter to his camera so that we could easily shoot the images directly into the iPad.  That way all the families could see the results instantly. 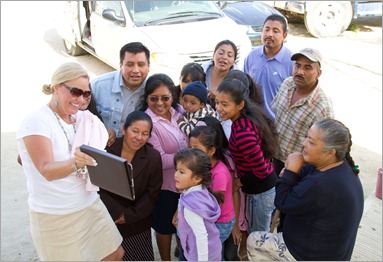 I have to tell you the iPad was quite the hit at our portrait session.

We all took turns shooting with the rest of us helping with posing or photographing overall views of the entire experience.

Even though none of us spoke Spanish and none of the families spoke English, we were  still able to communicate fairly effectively in spite of the language barrier. 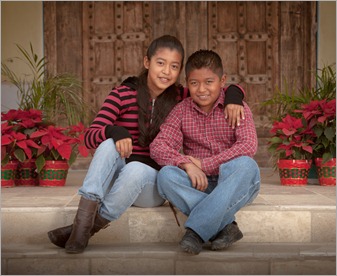 A short while into the shoot, Elsa and Donna – two of the ladies responsible for having the Mission Church built – showed up in our communications issues quickly subsided.

We ended up photographing entire families, brothers and sisters, good friends, the church pastors, and anyone else wishing a portrait.

LaDawn did a great job in setting up and arranging the groups. 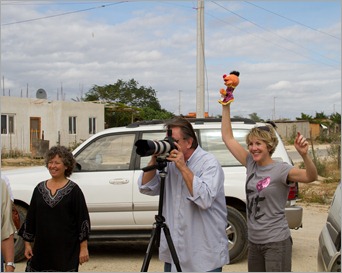 Sarah was pulling out about every trick in the book in order to get great expressions on all the children's faces.

Kent, Sarah, Ralph, and I took turns behind the camera shooting the portraits.

Yesterday, we imported all the images into Lightroom 3 and gave them a quick peek. I have to say, we all thought they turned out pretty good. The game plan is to do the best possible edit on the images that we have, fine-tune those images in Lightroom and Photoshop, put the best crop on each one of the images, and have them printed at the local Costco store. 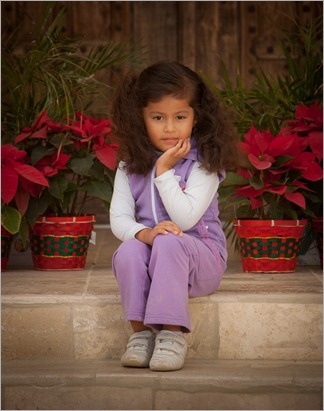 So far, there is been only one hitch. I readied four images for printing yesterday so we could see what kind of results we would get from Costco. I have to say, we were slightly disappointed with the results. See below to the next image. 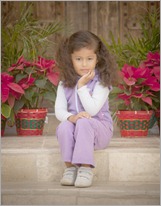 Costco is printing on Noritsu printers using the Fuji Crystal archive paper. The problem was that the four images I had given them for testing came out much lighter than what I had seen on my computer screen. But we returned home later in the afternoon. I double checked and verified that my computer screen was accurate and balanced with Costco's printing.

What happens many times when using the services of a Sam's Club or Costco, is that their printers are set up to do “auto color” and “auto density” corrections on the customer submitted images. As a result, our corrected images, were “corrected” again but not in a good way giving us a much less satisfying result.

We have two ways to approach fixing the problem.

Delivery Of The Portraits:

While shopping at Costco, LaDawn and Sarah saw some 5 x 7 and 8x10 frames that we all thought we could use to deliver the final photographs. 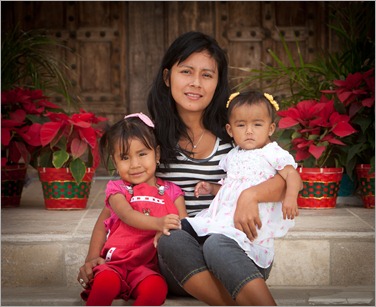 We also brought down a dozen 8 x 10 frames from my studio  which we thought we could use to frame up the images. We've already told Elsa that we would make delivery by Friday so it looks like, in our final vacation days, we've got a little postproduction work to finish up. But, who cares, it's for a great cause and we were thrilled to be part of it.

Epilogue – A Moving Moment For All:

I don't know if this happened to any of the other Help-Portrait projects taking place throughout the world last Saturday but I would venture to guess that we had one of the most heartwarming conclusions to our portrait sessions of anyone in the world.

Most all the families stuck around until we were completely finished with the photography. As we were packing up our gear, the pastor and Elsa approached us to tell us that they would like all us to come into the church and form a circle with all the families and children that were still there.

After we had gathered into a fairly large circle and holding hands, the pastor stood behind each of the six of us offering blessings and thank you's from the entire congregation. He moved each one of us with his hands on our shoulders offering his blessing with the children and the families echoing his blessings upon us.

After he finished, the entire congregation sang us a song of thanksgiving for our very special gifts we've given them that day. My thinking is that they gave us the greater gift. I have to tell you, there wasn't a dry eye in the house. It was probably one of most moving moments any of us have ever experienced in our lives and it will be long remembered after December 10, 2011.

Hey gang, that's it for me today. I had hope to get an Animoto video posted from our shoot but just ran out of time – maybe later this week.

Don't forget to check back in tomorrow. I’m leading off with a very huge announcement that I think you'll be pretty darn excited about. And secondly, I've got a pretty special Technique Tuesday planned as well.  So I hope you'll join me again tomorrow for another great day here at DigitalProTalk.

The sunshine and the sea breezes are calling, along with, Sarah, and LaDawn telling me to get off the computer and into my swimsuit ;~) I better get moving.

I'll see you then, David