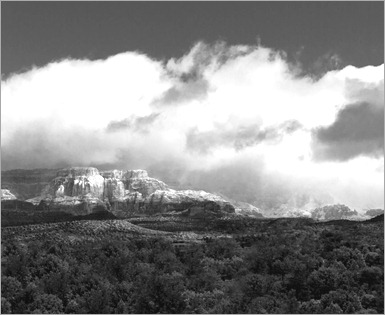 This image was captured last Saturday morning while in Sedona Arizona.  We awaken to the fallen storm over the mountains in the distance.  I grabbed some early morning photographs and decided to grab a cup of coffee.

Upon returning to our balcony view, the morning sun had begun to break through the clouds and splash it’s light on the snow covered mountains.  It was amazing to me how much the scene had changed in just a few minutes.  I grabbed the camera again and made this image.  It’s probably my favorite.

I remembered seeing an Ansell Adams image by the same name that he had captured in Yosemite National Park.  I thought, why not give my image the same name.

The remembrance of Ansell’s image also gave me the idea to work this image as a B&W image and over to ACR and Photoshop I went.  Within a few minutes, I had the image I wanted – sorry Ansell, no darkroom for me on this one ;~)