"The Future of America” 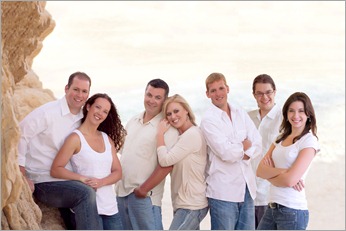 "The Future of America”
© David A. Ziser

OK, part of the future anyway ;~)  This image is actually a combination of three images that I made at separate times last year. As a Christmas gift, I took LaDawn and her three kids, along with their significant others, to Cabo San Lucas, Mexico. We all had a great time but, being the only photographer on the trip, it fell to me to do the family portrait. We got the locations scouted, the clothing coordinated, and headed to the beach. During the session I made LaDawn VERY happy with a great series of portrait images of everyone.

Eight months later we were in Florida to visit two kids. LaDawn had the idea of including them in the family portrait session that we had done with her children earlier in the year. The plan for the 2nd and 3rd shoot was to have my kids, wear the same type of casual clothing so that I could easily add them to the earlier portrait of the other five kids photographed eight months earlier.

This image is actually the subject of my Technique Tuesday for tomorrow. There was an extensive amount of Photoshop that had to be done just to extend  the background to include my two kids in the photograph.  I'll get into greater depth about that tomorrow.

As a family portrait, I think this image has a wonderful sense of rhythm and good feeling about it. The positioning of each one of the subjects individually complements the entire family group when taken as a whole.

Anyway, I think we are very lucky parents to have such a great family portrait of our combined families. LaDawn spent the weekend framing up the portraits which will hang in our small media room on the second floor of our home. They’ll look great!