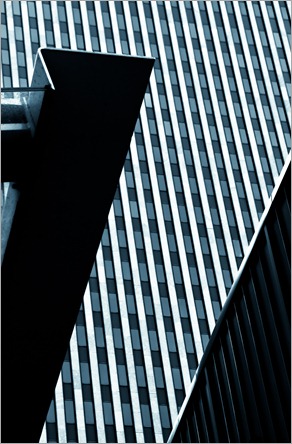 This image was made during our Scott Kelby Photo Walk in Cincinnati, Ohio in October. I'm always a big fan of the urban photo walks and this year was no different. We headed out in a different direction than we've done in the last three years so that really gave me a chance to see the city from a new perspective.

The primary building in this photograph is a large skyscraper in the background. It contributes the small, repeating rectangles to my composition. I rotated the image just slightly in order to introduce more diagonal elements into the scene.

I love how the two heavy, black, dark structures in the foreground simply rip crossed the more delicate rectangles in the background. I manipulated the tonalities in the scene to really play the darker tones against the lighter tones in this composition. I think it's the contrast of the smaller repeating rectangles against a large black areas in the foreground that add interest to this image.

I also like the fact that there was not one line in this composition that is either perfectly horizontal or vertical. I think it's the play of the diagonals across the scene that add to its interesting, abstract nature.