So Do You Know What You’re Shutter’s Doing? 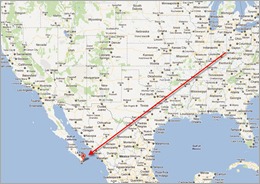 The weather forecast looks perfect with temperatures hovering in the low/mid 80s – that sure will be a break from our three rainy 40 degree days in the greater Cincinnati area;~)

Anyway, our bags are packed and were ready to go. With my early wake-up call yet again today I got a chance to put a quick post together for you before we head out of town. It's a short one but I still think it gives you food for thought and I hope you enjoy it.

So Do You Know What You’re Shutter’s Doing?

So the question is do you know what your shutter is doing? That might sound like a strange question but, if you follow DigitalProTalk, you know that I "cheat the sync" quite often - like in this image. 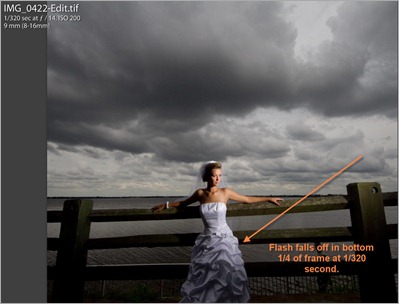 What does that mean, exactly? It means that I use a faster shutter speed than the  native sync speed of 1/250 second on my Canon 7D. The reason for that is the fact that I want to darken the sky substantially by underexposing it and really have the subject pop out from the background.

When working outdoors even with low ISOs I still, many times, am using a fairly small aperture at 1/250 second. Small apertures necessitates the use of even greater flash power but with my Quantum T5d, I'm limited to 150 watt seconds. The only way to darken the sky without changing the aperture is by increasing the shutter speed. But, there is a problem with that. At the native sync speed the CMOS sensor is fully exposed to the flash. As I begin going beyond the native sync speed the shutter curtains will cover part of the CMOS sensor during my flash exposure.

That's not necessarily a bad thing. As long as you know which part of the CMOS sensor is exposed at the various shutter speeds, you will have a working solution for using faster than normal sync speeds. Check out the next few images. 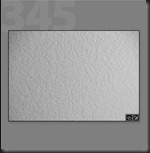 You can see that the first was shot at the native sync speed and the CMOS sensor is fully exposed. The second image, with the shutter speed of 1/320 of a second, the shutter curtains reveal most of the CMOS sensor meaning that I can routinely use 1/320 second as a normal shooting sync speed. 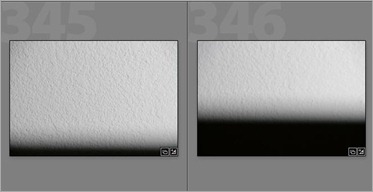 The third image was taken at 1/400 second and you can see that that the flash did not reach the bottom third of the sensor. No problem – if we keep the subject in the flash illuminated part of the sensor.  Then our exposure should be just fine.

Now look at the fourth example below – it was taken at 1/500 second. Still, with only the the top 1/2 of the CMOS sensor receiving the light from the flash I could still make the shutter speed work for me. 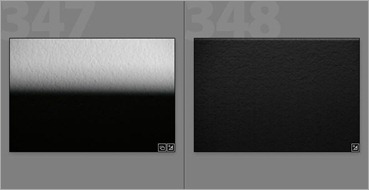 I know what you're thinking, "How can 1/500 second work if the bottom half of the CMOS sensor never receives any light." The easy answer to this; and I mentioned it many times in my seminars, you simply rotate the camera 180° and frame up your subject in the flash sync part of the viewfinder. It actually works like a charm check out the image below - it was taken from my book "Captured By The Light". Just a reminder… you can still pick up an autograph copy for only $29.95 till Christmas. Simply visit my Digital Resource Center for all the information. 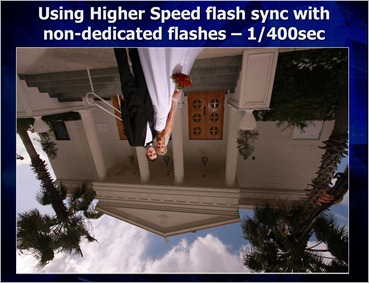 Yes, I flipped the camera 180° and put the bride and groom within the flash sync part of the viewfinder and captured what I believe to be a great result. This allowed my sky to pick up the rich tonalities I desired and provided the necessary light to fully illuminate the bride’s dress.

DAZNOTE: Remember, even though these examples are showing the bottom part of the sensor as totally unexposed, that's not the case in "real life". The ambient light will still strike the non flashed part of the sensor giving me plenty of detail in that section of the image.  The image just looks like it's slightly vignetted which works quite well for many of my dramatic pictorial images.

So let's get back to our original question – do you know what your shutter is doing? The easy way to check your shutter's behavior is to put your camera on manual and take your off-camera flash, I prefer the Quantum strobes, and make several exposures at different shutter speeds to determine which part of the CMOS sensor is exposed during these various shutter speeds.

That's exactly what I did to come up with these four photographs. Notice that the fifth image above is completely black. That tells me with my camera 1/1000 second none of my flash reaches the CMOS sensor. But, what my little experiment did show me was that I can get by with working faster shutter speeds of 1/320 of a second, 1/400 of a second, and 1/500 of a second routinely.

So run the test yourself and see what your camera does at those very shutter speeds. I also need to point out that shoe-mount flashes will limit your fastest shutter speed to 1/250 second unless, of course, you activate the high-speed flash sync feature within your shoe-mount flash.

People many times asked me why I just don't use the high-speed flash sync feature. The main reason is because the power output from these small flashes is simply not large enough to give me the power I need outdoors. For me, the more power the better to capture those dramatic outdoor bridal pictorials that I so enjoy creating.

I had planned, over the last couple weeks, to do a Technique Tuesday discussing high-speed flash sync. Bad weather most of those days and an overwhelming amount of work kept me from really getting that tutorial completed. I've got three shoe-mount flashes packed in my suitcase so maybe when we get the Mexico I'll be able to get that tutorial organized to share with you.

Hey gang, that's it for me today. Our plane leaves shortly and with one stop in Dallas we should be at our final destination by 4:30 p.m. this afternoon. How about I see everybody tomorrow same time, same place for our weekly Business Day Thursday post. Our topic tomorrow – "Hickory Farms Does It and Omaha Steaks does It, Do You?”

I'll leave you to ponder the meaning of the title until we get together again tomorrow. Have a great rest of the day and I'll see you tomorrow hailing from San Jose Del Cabo, Mexico.