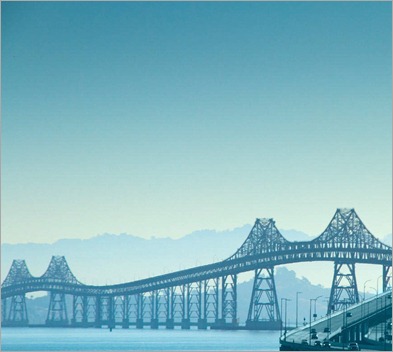 This is an image I made as we were approaching the Oakland Bay Bridge (I think). It was quick bright and hazy on our approach to San Francisco.  I grabbed this image. But don’t worry – LaDawn was driving– just as we were making our approach to the bridge.

I really like the soft curves of the bridge structure against the faint hills you see in the background.  The haze did a great job of adding subtle nuance to the colors and depth of the scene.

I enhanced the colors just a bit in ACR by kicking up the Vibrancy slider slightly and added the gradient to the sky.  On my first pass, I thought I had what I wanted.  I even added the image to my post ready to go.  Something was just not working for me though.

The bottom right of the image, the approach showing the traffic was sort of a plain-Jane brown – it just didn’t fit the tonality of the rest of the image.  That part of the bridge was much closer to the camera and wasn’t being affected by the more distant haze.

Back to Photoshop I went, brought it the Color brush and gave that part of the image the same blue wash as the rest of the image.  Now I think it works.  Who says you can’t get a good image from a “drive-by-shooting”?