Photo Walking Happiness, Marketing Mojo, and Lightroom 3 Anywhere You Like It

I've got a few cool things to tell you about his morning so let's get right to it.

Our Photo Walk Was A Great Success 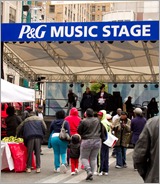 What a blast we had on Saturday at Scott Kelby Photo Walk -Cincinnati!  The weather was a bit chilly, but that still didn't deter our group from enjoying a fun Photo Walk. We met at Fountain Square in downtown Cincinnati, OH and just as we were about to begin our walk, the music got rocking on a stage set up nearby.  I took full credit for arranging the music gig just for our walkers;~) 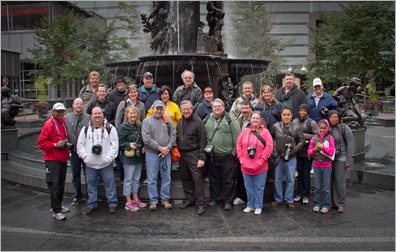 That’s most of our group above. I themed this years walk as Soho Cincinnati because we were going to be walking through one of the more eclectic parts of the city, the newly renovated “Over The Rhine” area. 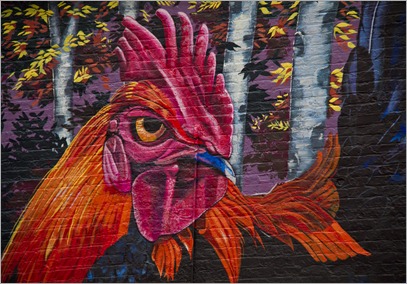 In years past this is a part of the city that most folks would venture into cautiously.  But because of all the rebuilding the area was safe, full of color, with lots of interesting things to photograph.  I think most of our walkers enjoyed exploring that part of the city and were quite surprised at how much development had taken place over the last few years.

Another highlight of our walk was the addition of cute Miss Jordan who played model for a lot of our photo walkers.  Jordan could really hit the poses.  I want to say a special thank you to her mom, Katrina, for bringing Jordan along. Oh, is that the famous Ziser Zumbrella Jason is using for this shot – you bet it is. Jason brought it with him ;~) 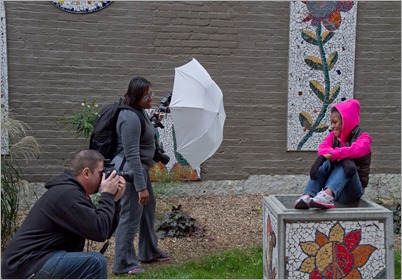 Rumor has it that Jordan was also planning to join fellow photo walker, Jason Lykens, walk the next day - probably for more modeling too. That’s Jason getting the photo above.

Jason Lykins, took our group photo in front of the Tyler Davidson fountain. Jason was one of our "celebrity" walkers.  For those of you that don't know, Jason does a lot of the writing for Terry White's Best App Site right here.  Terry, a prolific blogger who authors Terry White's Tech Blog just started his Best app Site about a year ago.

The Best App Site reviews all the latest greatest apps for the iPad and iPhone.  Anyway, Jason does several of the posts and told me that he's has a few more very interesting reviews going up this week.  You just may want to check it out right here. 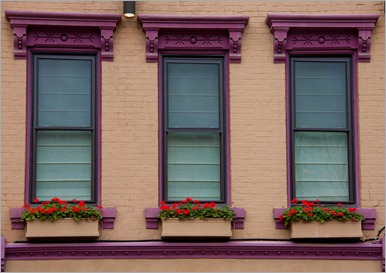 Anyway, it was a nice 2 hour walk and we all captured some great shots – that’s LaDawn’s image above.  I was peeking at the back of several cameras and was impressed with what I saw.  We created a Flickr group to post our images.  I'm sure our walkers will begin uploading images to it shortly. You can check out our Flickr Group right here.  If you want to peek at other images from around the world, check out the main Scott Kelby Photo Walk page right here - lots of very interesting images.

Last Friday I had a really nice conversation with marketing guru Sarah Petty.  Sarah and I have known each other for a few years but it was really nice to get to know her even better after our hour long phone conversation.

If you are not synced into her Joy of Marketing initiative, you are missing the boat on making a BIG difference in your business success.  Last Thursday In my Business Day Thursday post [link] I mentioned that we have a lot more photographers that have flooded the market, but so few of them know how to run a business or market their work.  That's exactly what Sarah and I talked about last week and that is why she started her Joy Of Marketing program. 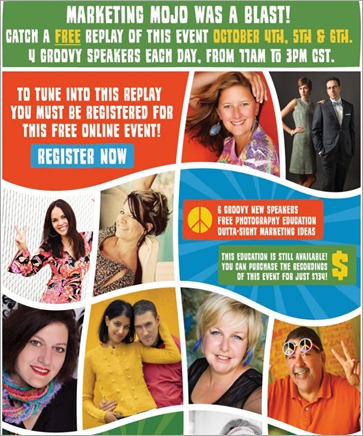 OK, your first question is probably, "How much is this going to cost me?" Right?  How about nothing at all.  Sure you can pick up the archived 12 hour program for a nominal sum but the real treasure is the fact that you can listen to the entire twelve programs from 10 speakers for free this week beginning Tuesday, October 4th.  That's right FREE!!!  All you need to do is follow the link right here, sign in, and you are good to go.

I spent a little time on Sarah's Marketing Mojo site over the weekend and was amazed at all the other FREE stuff being offered by her six successful presenters.  Folks, if you want to make a difference in your business, this is one web-stop you need to make!

I love reading/devouring/consuming content on my iPad via the best iPad app in the world, ZITE.  Anyway, I was deeply involved in exploring the latest and greatest news in the world of digital photography when I unexpectedly saw this great post by the above mentioned indefatigable Terry White.

In his post Terry outlined how he was able to use his Lightroom catalogue from any of his computers from anywhere in the world [link].  Hey, the lack of Lightroom not running on a network has been a real pain in the you know what around my studio since Lightroom was released way back in 2006?

We came up with a pretty good work around last year which I blogged about right here.  The problem for some Lightroom users is that it’s a PC only solution.

Terry's idea works cross platform.  Yes, you can open your Lightroom catalogue on your PC and your Mac computer!  Amazing!  The secret is in downloading and installing Dropbox on your computer.  Dropbox is my "go to" favorite file sharing app.

Here's what Terry is up too but first let me say it loud and clear - it is the cleverest most genius inspired idea ever for us Lightroom users ever.

Terry loads his Lightroom catalog into his local Dropbox file.  Dropbox then syncs that file to all computers which have Terry's Dropbox account set up on them - Mac or PC, it doesn't make any difference.

With this Lightroom catalogue file synced up on all his computers - all the time via the "cloud", he has instant access to his Lightroom images anytime he wants. I've just begun to experiment with the same thing at our studio.  I think Terry's idea is a game changer for any studio running networked computers and wants their Lightroom catalogues easily available to any workstation.

I think there are a few pitfalls, but I also think there are easy work arounds too.  I'm going to play around with Terry's "cloud" concept Lightroom catalogue sharing and give you an update on Thursday.

Hey gang, that's it for me today.  As usual, it's Monday and we are pretty darn busy around here. It’s a sort in-studio week for me and I've got lots to do.  Signups for my Captured By The Light California  [link] tour are filling quickly.  You can register here.

Don't forget about our FREE webcast this Thursday with Adobe Certified Expert, Suzette Allen.  Still plenty of room – you can register here.

OK gang, I'm outta here.  See ya' tomorrow for another Technique Tuesday - it's shaping up to be a good one.

See ya' then, David