"Dancing On The Circle" 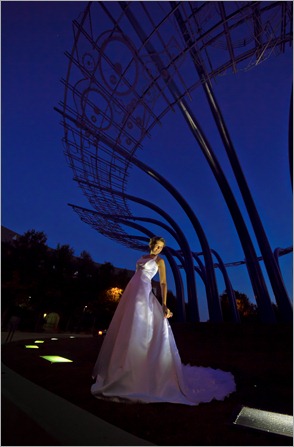 "Dancing On The Circle"
©David A. Ziser

Last Friday I posted one of my favorite images [link] from my Thursday evening Shoot-Out at Texas School a few weeks ago. That same location bore photographic fruit with several other images as well.  This is another one of my favorites. Dodging the cars and fighting the light, I was able to pull it off.

Yes, dodging the cars first.  I was trying to get this shot in a very busy part of Addison Circle.  Every time I had the shot lined up, a car would come whizzing by and I’d have to move.

The lighting was the most challenging.  The lights you see in the ground illuminating the sculpture above are very bright quartz halogen lights indeed.  Instead of using strobes on this image, I chose instead to use the lights around the perimeter of the traffic island.

I needed to get the bride’s face oriented to the one light that you see in the bottom right corner of the scene. The orientation had to be just right to get some semblance of a “loop lighting” pattern on her face.  After working the pose a bit, I managed to pull it off.

I didn’t want her directly in front of the light because, if I did, my exposure on her would have meant that I would have severely under exposed the rest of the scene.  I managed to position her just out of the direct light beam.  That allowed an exposure that gave me a better tonal balance overall.  I still needed to add a bit of “Fill Light” with Lightroom 3 to finish up the image.

There are several things I want to point out in the composition of this image.  First look at how the lights on the ground come around and lead the viewer’s eye right to our subject.  Also notice where I positioned her head – right where the curving elements of the structure behind her intersect.  Any other placement I tried just didn’t work.

Even though she is “dead center” in the frame, it doesn’t appear so with the enormous sculpture looming over her.  Anyway, kind of a cool image to me.