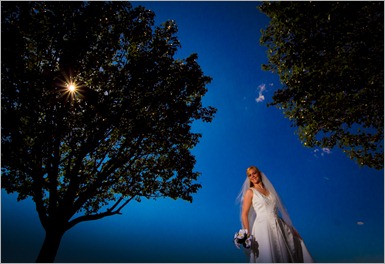 "Skies Of Blue"
©David A. Ziser

You would not believe the conditions under which this image was captured.  Bright afternoon sun, no acceptable location to place the bride for a decent background – nothing was going right.  It looked like we weren’t going to get anything till I decided to “play” with the light.

The background of this scene was the church parking lot – with several cars parked in it!  Beyond the parking lot was another building – ugly and pretty darn challenging.

I figured that if I got as close to the ground as possible that I could eliminate most of the clutter in the background.  That worked for the most part but I wanted all the clutter gone.  That meant a slight 3/4 crop on the bride. That mostly did the trick.  I still needed to remove a few of the parking lot lights but that was easy in Photoshop.

The next problem was the bright sky behind the bride – how could I get any color at all into that sky"?  The answer, of course, is to under expose the sky.  That was going to be a bit more difficult because I still needed to get light on my bride’s face.  Anyway, I decided to give it a shot.

I brought my 150 W.S. Quantum flash in close from camera left.  How close – about 4 feet away from the bride’s face.  If you look closely, you may still see some remnants of the flash hiding within the tree on the left.  Reminder, if you are going to include your gear in a shot, be sure to put it in a “Photoshopable” area of the image.

Anyway, we were able to pull it off and capture a great image to boot. I especially like the sun peeking through the trees ;~)