"Goddess Of The Sea" 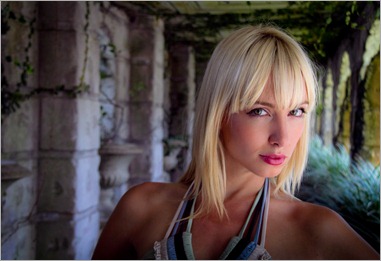 "Goddess Of The Sea"
© David A. Ziser

OK, the title may be a little weak today, but it’s all I could think of.  Sea foam kept sticking in my mind as I was trying to name this image.  Sea foam was the color of the dress she was wearing and the place where this image was made was actually under flowing water.

How about the photograph itself?  It was a straight available light image.  The sun, as usual most of this week, was ducking in and out of the clouds so my exposure was constantly changing.  No problem, just keep your wits about you and make the exposure corrections on the run. This image was made is the worst of locations.  We had to move a bucket of mud, a watering hose, and trip around some debris that was in the area.

Was it worth it – I think so.  The repeat of the the Roman style columns, the rough hewn stones, and the gorgeous lighting came together for the amazing portrait of Hope.

Subject placement was important to me – I decided to have her tilt her body slightly to add a nice diagonal line to the setting.  Next I placed her eyes in the top right quadrant of the viewfinder,  at nodal point #4. That let the rough repeating stone work lead the viewer’s eyes to her beautiful countenance.  The repeat of the columns on the right and the ferns on the left side of the image did a nice job of framing up our subject and also leading the viewer's eye directly to our subject.

Hey gang, I’ve got to hit the road early this morning.  We got to video a few recap segments of my training videos and then it’s off to the airport for an early afternoon flight.