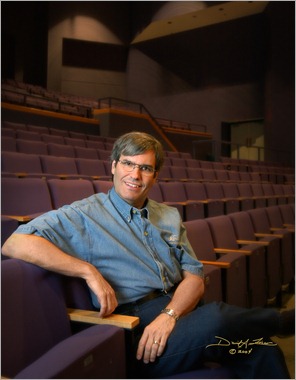 "Relaxing Between Takes"
©David A. Ziser

This image is from one of the location shoots I’ve been discussing over the last three weeks.  The image happens to be of my good friend Jim Fauz who volunteers for the Northern Kentucky Symphony as the videographer recording all their events.  Jim has also been one of my coaches at our Digital Master Classes [link].

I took this image of Jim in the main auditorium of the Northern Kentucky University theater where the performances are held.  I loved how the seats curved around in the auditorium creating a nice background for the image.

Notice how the seats seem to “vanish” outside the image frame to the right of the image – that’s the vanishing point.  Jim is opposite that point.  This positioning really helps draw the viewer’s eye to the subject making the subject almost project from the scene.

Lighting was accomplished by simply shooting through my umbrella coming in from camera left and turning Jim’s head slightly in the direction of the light.  Notice the nice loop lighting pattern on his face.  The rest was easy – just balance the flash exposure with the ambient light of the surrounds, ask for an easy expression and I’ve got the shot I wanted.