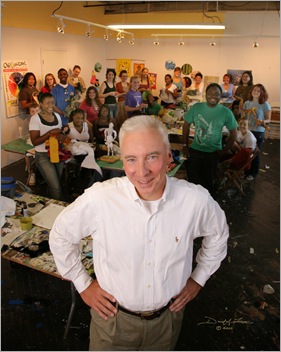 "The Artists’ Mentor"
©David A. Ziser

This is another image I made a few years ago featuring one of Cincinnati, Ohio's Inspiring Volunteers of the Arts. When I spoke to the gentleman about his portrait and what I wanted to do, he quickly offered an idea that not only featured him but also featured the students he taught.

I loved the concept, now all we had to do was pull it off. He was involved in a program that reached out to kids in the inner city and who are rarely exposed to the arts. OK, how was I going to pull off the shot? We were working in a not too large art room littered with the "tools of the artists trade". I wanted the image to be more than a simple group shot. I really wanted to feature our volunteer predominately in the composition.

We found a rickety old step ladder upon which I would perch and take the shot. I climbed the latter with someone steadying it for me, had my assistant bring in the light from camera left, framed up the shot, and pressed the shutter.

The exposure was pretty much balanced with the ambient light in the room so we could see the kids clearly. My flash at 1/4 power shooting through an umbrella about 10 feet away provided the primary lighting for this image. He loved how the photograph turned out.