Well, my day really lightened up.  I was scheduled to photograph the official portrait of one of the leading religious leaders in Cincinnati this morning, but because of a schedule change on his part we need to reschedule the shoot.

Hey, no complaints from me.  How many times do we get a FREE day to take care of some of those loose ends that seem to never get taken care of? Not very often. Heck, I might even take LaDawn out for lunch - what a concept.

Many of you know I've been a BIG JPEG shooter for most of my digital life switching to RAW in the mid 2008’s.  After shooting for almost two years, I have to say that I have not fully drank the RAW kool-aid yet.

Sure, I like RAW and  how I can really tweak the image in Lightroom. Heck, it was the Adjustment Brush - localized control over image density - that made me switch from shooting JPEG to RAW. But now two years later, and reflecting on my shooting routine over these last two years, I believe JPEGS should still have a place in any event photographer's shooting routine.

Why? That's the subject of this week's PhotoFAVS Wednesday. To many photogs, mostly RAW shooters who really have "drank the kool-aid", they see no place whatsoever for shooting JPEGS on a job. But today, let me give you a reason to reconsider shooting JPEGS for at least part of your event coverage.

It has to do with the camera's own built in electronic noise reduction algorithms that come into play when you set your camera to JPEG mode.  There's just something about how the camera reduces the image noise that gives us a much cleaner result in our finished image.

I know a lot of you think I'm crazy  - and my "kool-aid" comment will probably garner a nasty comment or two, but folks, it still comes down to the finished image and how we choose to use our digital hardware to obtain that result.

This past weekend, I shot a lot of the Bar Mitzvah in both RAW and JPEG. Yes, same shot, both modes.  I've been having this "inkling" that the in camera noise reduction could be doing a better job in the "noise reduction" department than simply relying on the noise reduction software available on the market.

Could I obtain a better low noise image by shooting in JPEG Mode with the camera's "noise reduction" feature turned on and then run it through a favorite "noise reduction" software?  Folks, I present you with my results.

Let me set up the shooting scenario.  At Saturday's party, the slide show had just begun and parents and kids alike were enjoying the show.  I love to roam the audience and capture the tear in mom's eye or the happy, smiling faces of any of the kids watching the slide show.

The ambient light is usually at a pretty low level which necessitates high ISO shooting.  The lighting decor also had the dance floor flooded with very yellow/orange light which created the heavy color cast to the scene.  For my "experiment" I decided to NOT do any color correction. I only wanted to compare the "noise" levels in each image and additional image manipulation may have skewed the results.

I settled into ISO 3200 and began photographing the crowd.  Check out this first image, below.  I shot it RAW and then cropped it much closer so you could more readily make the noise comparison in each image.  This RAW image shows the most noise. 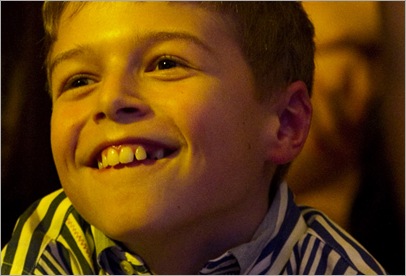 Now look at the next image shot in JPEG mode with "noise reduction" turned on. - I had the camera set to "Standard" on my Canon 7D.  It is clearly superior - showing less noise - than the RAW capture. 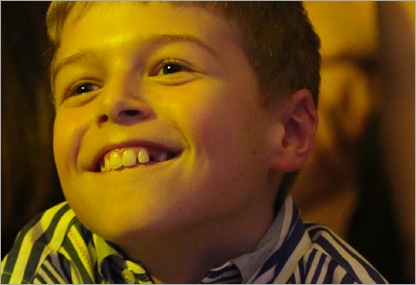 Now look at the third image.  It is the RAW image imported into Photoshop from Lightroom. I did no "noise reduction" in Lightroom, by the way.  Next I ran the image through Noise Ninja by Picture Code [link].  I like NIK's Dfine 2.0 [link], but since Noise Ninja reports a "noise index", and I thought that would be a good way to quantify my results. 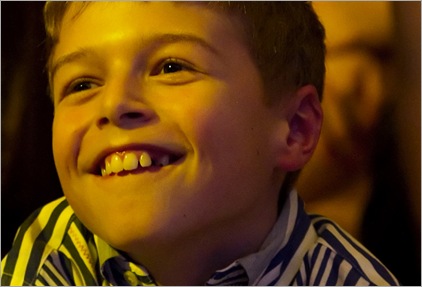 Noise Ninja reported a "noise index" of 51 for the RAW image.  That's pretty high based on my Noise Ninja experience.  Anyway, take a look at this third image.  It is clearly an improvement over the original RAW and JPEG files.

But now look at the fourth image.  It's the result of running the JPEG through Noise Ninja. 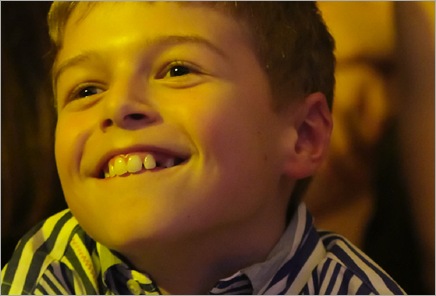 In this case, the "noise index" topped out at only 35 - not bad.  And, as you can see, the result is really, really good.  Skin tones are smooth and just about all the noise has been substantially disguised.

So would this kind of low light shooting situation be best shot in JPEG mode?  I say a resounding "YES!!!" for three reasons:

1. These types of candid images are not going to be "headlining" images in the final album. It's these kinds of images that capture the "flavor" of the event and are what I call "third tier" images.  In these instances JPEGS are just fine.

2. I'm dealing with very slow shutter speeds, too.  That means that I'm going to be taking several images to be assured that I have one really sharp image. That's even assuming my lens image stabilization is doing a good job for me.  There simply is no reason to chew up a lot of "hard drive real estate" to store these numerous images.

3. And most importantly, I obtain the best "low noise" result when I combine the camera's built in noise reduction with that of NIK DFine 2.0 or Noise Ninja.

So there you have it.  For me, RAW vs. JPEG is not a "religious" argument in which I need to take sides. Actually, taking sides in the RAW vs. JPEG debate will only lead you down the path of compromised imagery.  For me, it's always about using the right tool for the job, whether that "tool" be a camera, lens, or even a camera setting.

Hey gang, that's it for me today. And,please note that I not trying to pick any RAW vs. JPEG "fights" today.  I just don't want you to close your eyes on other options that can many times simplify your shooting routine and lead to a better result.

That said, I'm out of here.  I'll see everyone tomorrow for another episode of Business Day Thursday.  See ya' tomorrow,  -David