"On Top Of The World" 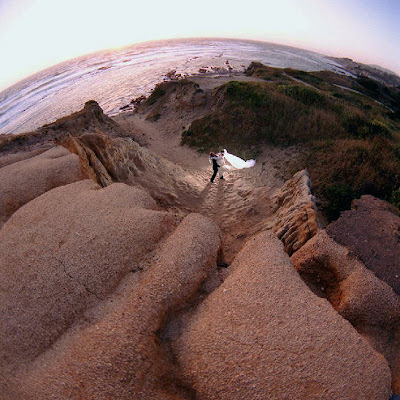 "On Top Of The World"
© David A. Ziser
I posted this image early on in my DPT blogging days before I was adding the technical information. I thought I would bring it around again since we are talking about the fish-eye lens today. This image was made several years ago while teaching in La Jolla, California. I loved the rugged landscape, and planned for the bride and groom to be near the top of the roc formation. But the wind was blowing at about a sustained speed of 30 mph. It was just too windy to have the couple stand in that strong wind. I decided instead, to have them make their way to the bottom of this unusual mini canyon. There they were nearly blocked by the wind and when I framed them up in the viewfinder, I was able to capture this really cool curvature of the horizon line. I had my assistant hold my radio controlled 200 watt-second Luma-Dyne flash behind the couple to add the dramatics to the scene. Camera specs; Hasselblad 500 CM fitted with 30mm Distagon lens, F 8.0 @1/500 second, Kodak Vericolor film - ISO 400. Enjoy! -David
Posted by David Ziser at 8:01 AM