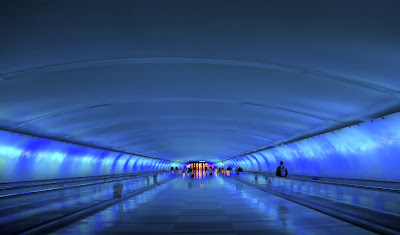 "Into The Light"
© David A. Ziser
I made this image during our flight home from New York last Saturday. We had to travel through Detroit which has completed a brand new airport - and, boy, is it a cool airport. Walking through the long corridor connecting two of the terminals was a kick and kind of reminiscent of the walk to the United terminal at O'Hare airport. I managed to pull off this shot while there were not too many people in the scene. It was mid-day Saturday and travel traffic was down a bit for the weekend. The challenge was timing the lights just right to get the beautiful rich colors I wanted to capture in the final image. I don't mind the slight blur of the travellers, in fact I think it adds a sense of motion to the scene. Anyway, I hope you like the urban landscape captured here. Canon 40D Fitted with 18-200mm IS lens at 18mm, F 3.5 @ 1/25 second, ISO 500. Enjoy! -David
Posted by David Ziser at 8:01 AM