Good Morning Everybody,
Well, LaDawn and I arrived home safe and sound from New York midday on Saturday. We covered a lot of ground at PhotoPlus Expo. I wish we had one more day available to us there. I hadn't been to PhotoPlus Expo in a number of years so it was really outstanding to get a chance to catch up with friends and relax after the tech closed for a few hours. Throughout this week I'll cover a few of the things that I thought were the most interesting, at least for me, at the show.

New Contest:
I thought the nicest things that happened while we were walking the show was the fact that so many of our DigitalProTalk readers came up to say HI and check out how my eye was healing. The eye is doing just fine - by the way - thank you. Several of you had stories that were even funnier than mine and probably just as embarrassing. Probably the best story was about the photographer who backed up into the baptistery font and basically soaked his whole suit. Another story I heard was about a photographer who had backed off of a pier with both cameras around his neck and fell right into the water. Another good one was the story about the photographer who dropped his lens from the balcony of the church. Fortunately, no one was injured. All worth a good giggle or two.

Hey gang if you've got a good wedding story, why not share it here. I'll give the winner of the best story, at least in my opinion, a $50 gift certificate from B&H. The only ground rule is that we have a minimum of twenty stories to select from. I'll let the contest run for a few weeks and let's see adventures are submitted. 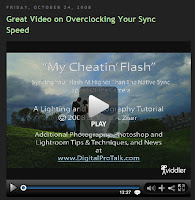 Saying Hi To The Strobist:
On Thursday, right after lunch, I ran into David Hobby of Strobist fame near the Nikon booth. We both shared some pleasant hellos and he mentioned to me that he was doing a Friday post featuring my tutorial entitled, "My Cheatin' Flash" on his Strobist site. Needless to say, any mention by the Strobist, a very good thing, means that you have a big bump in your traffic.

I headed over to his site just to check comments from his readers - mostly to see if there were any questions and if I had missed anything in my tutorial. Let me take just a minute to clarify a few concerns that arose after posting the information. The entire tutorial, "My Cheatin' Flash" is primary targeted with use with a powerful non-dedicated off camera flash like the Quantum you see me write about so many times here. For me, I need the added power of my 200 watt second flash for so many images I create. I know, I don't have a problem with my dedicated Canon 580 EX II flashes while shooting in high sync flash mode.

Some suggested that instead of turning the camera 180 degrees to keep the subject in the flash sync part of the viewfinder, I could just put the camera in "rear curtain" sync mode. That would be true if I could set that at the camera level. That function on my Canon's is only accessible from the flash menu. I guess I could have just turned my on-camera flash on, pointing the flash upwards so it's light didn't impact the scene, and get the same result. That just seemed like too much extra work to me.

And finally, yes, I am jealous my 40D doesn't have an electronic shutter capable of syncing at any speed like Nikon's D40. Next week, I'll do a tutorial on high speed flash, so stay tuned. Again, my sincere thanks to David for the mention.

Meeting With Gerry Ghionis:
I had the pleasure of meeting Gerry some months back at the WPPI convention. We had a nice visit over dinner and hoped our paths would cross again. Gerry had a booth at the PhotoPlus Expo where he was featuring his new website, The I.C.E Society, a site dedicated for the wedding photographer. You can get a 15 minute peek right here. Gerry shared further information about the "secret handshake" to take an additional peek at what he's put together. When I get a little time in the next few days, I'll swing by and take a look and let you know what I find. L Stay tuned.

Canon5D Mark II - Up Close And Personal - Almost
Well, not really that close. The Canon booth was packed as would be expected after the recent Canon 5D Mark II announcement, so I didn't get as good a look as I had hoped. The good news is that I'll have a loaner in my hands, assuming all goes well, in just a few weeks. I will give you the low-down right away. Look for that to happen in the first week of November. It sounds like Canon has pushed the ship date up closer to the end of November according to my grapevine.

RAW Directly To JPEG
Scott Kelby was also running around the show non-stop - where does he get all that energy? I got a chance to say a quick HI and then we were both down a different aisle. LaDawn caught one of Scott's programs where he mentioned a cool little program that lets you extract the JPEG associated with the RAW image directly from RAW file, and the darn thing is free. Here is the link to the site for the rest of the story right here. You can download the utility from RawWorkflow.com right here. I haven't had a chance to check it out yet, but if Scott endorses it, it must have something going for it. Check it out.

Well gang, that's about it for me today. Today is the first day of a brand new project for me. All I'm going to say is that it is a book project probably on "you know what...". That's all I'm going to report about it right now till I get a little more of it under my belt. Needless to say, I'm excited about the new project. I'll keep you posted as to how it progresses.
Heck, if you've got any ideas for topics, let me know - I'll see if they fit. Anyway, got to run, my publisher is calling ;~) Don't forget tomorrow for our Technique Tuesday episode: Underexposure - Bring An Image Back From The Dead! See ya' tomorrow, David
Posted by David Ziser at 2:22 PM