PhotoPro Expo 2012–The Photographic Super Bowl of the year–and WE WON!!!

I know what you’re thinking – “Where in the world is David Ziser? Where are my DigitalProTalk posts!?”  Don’t worry, I’m back or, at least almost back. The last time I checked in with our DigitalProTalk readers was last Thursday when I updated you with our world wide webcast of the PhotoPro Expo Print Competition.  Then I went MIA.

LaDawn and I have been up about 5:30 every morning and didn’t hit the sack till about 12:30 every night.

Honestly, it’s been crazy down here at the Convention Center, non-stop for FOUR SOLID DAYS!  I haven’t has 1 spare second to even think about a blog post!  So you ask, “What was going on to keep you so busy?”

1. PhotoPro Expo 2012 was the LARGEST regional photographic event in the USA with over 1,000 - yes – over 1,000 photographers in attendance! 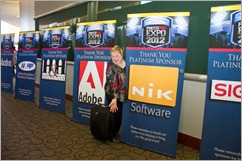 2. PhotoPro Expo 2012 was the fourth largest photographic convention in the country!

3. PhotoPro Expo 2012’s trade-show was also the largest regional trade show in the country and the largest in the Midwest.

4. PhotoPro Expo 2012 hosted photographers from 25 states and Canada – the first time ever a regional convention had such a geographic diversity!

5. The speaker lineup - Scott Kelby, Vincent LaForet, Jerry Ghionis, et. al. rocked the house with huge crowds for all programs – even those beginning at 7:30 a.m. Jerry Ghionis, who is conducting his daylong program right now, brought down the house Saturday morning with a standing ovation from a 625+ crowd!

7. PhotoPro Expo 2012 was the first fully juried photographic print competition to go “LIVE” - broadcasting over the internet to all the states in the union and dozens of country’s around the world – including the Federated States of Micronesia – yes, they were listening to us in the middle of the Pacific ocean!!! 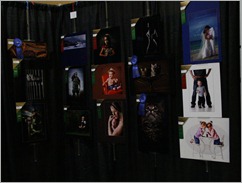 8. PhotoPro Expo 2012 had more photographic print entries than ever before!

9. We had more people register before the show closed than any other photographic convention. We’ve got some big ideas in mind to push that number even higher over the next week - so stay tuned.

10. And finally, thanks to all the stars aligning perfectly, we had PERFECT weather for the entire show considering we were holding PhotoPro Expo 2012 in February – low fifties most days! It looked just like it did on the PhotoPro Expo web sight ;~)

So, folks, that’s what I’ve been up to these last four days.  Let’s just say we were busy, BUT – we were the Super Bowl of photographic events and WE WON!!!!!!

See you tomorrow everybody.  I’ll fill you in on the good times over the next few days.