Lighting: A Look Back At A Little Industry History 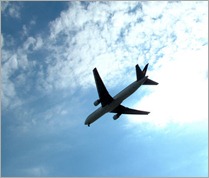 Today marks our last day in Las Vegas.  Tomorrow we hop the plane back home to Cincinnati, OH landing in the early evening.  We have had a great time in Las Vegas on this visit.

Yesterday was kind of an “off day” but I never quite figure out what I mean by that.  I was up fairly early, worked on the blog for a couple of hours, checked in with my Executive Director at PhotoPro Network, reviewed a book for Focal Press, caught up on over 500 emails, and was at a stopping point about 4:00 p.m. Yep, that’s how my “day offs” go ;~)  Anyway, I’m not really griping – it really did feel good to have the “day off” and work on the things I really enjoy doing.

A Look Back At A Little Industry History 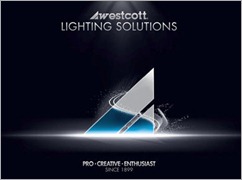 Later in the day we caught up with my good friend, Tom Waltz, president and CEO of F.J.Westcott.  I think Tom and I are “cut from the same cloth” as they say because we really enjoy just hanging out, talking about the trends in the industry, and reminiscing about old memories and friends.

In our conversation over dinner at one of my favorite restaurants here in Las Vegas, Piero’s, Tom shared a bit of Westcott’s history with LaDawn and I.  Westcott’s beginning go all the way back to 1899.  Tom’s grandfather was in charge of the company by the early 1900’s.  Westcott, one of the industry’s leading manufacturers of lighting modifiers, began as a manufacture of umbrellas.

Here’s what I didn’t know.  The company eventually segued into the manufacturer of golf umbrellas in the early 1940’s.  It was Tom’s grandfather who asked a young up and coming pro to work as the head golf pro for a golf club he was working with.  That golf pro – Byron Nelson, one of the all time great names in golf! 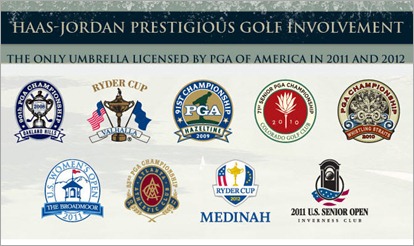 Byron told Tom’s grandfather that he really wanted to be a traveling pro, eventually gave up his club pro position and went on to win 11 consecutive tournaments and 18 total tournaments in 1945! Because of Byron’s success on the golf circuit, Westcott (under the name of Haas Jordon) and the PGA became synonymous names in the sport.  Tom’s brother continues to run that part of the business.

F.J.Westcott Makes The Move Into Photography

Tom was always interested in photography even working in a local camera store in Toledo, Ohio while growing up. He continued that interest in photography and his path eventually crossed with another of the industry icons, John Shirilla, who was president of the Photogenic Machine Company (now shortened to Photogenic), the leading studio lighting manufacturer at the time. 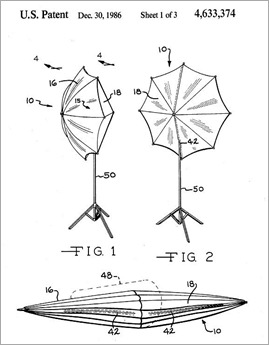 John had an idea for a new light modifier and showed it to Tom asking him if his company could manufacture it.  That was back in 1984.  It was kind of a folding umbrella with a special diffusional panel attached to it. Tom thought that he could and worked out the rest of the manufacturing details. The rest is history – the Westcott Halo received it patent, Patent # 4,633, 374, on December 30, 1986 [link] with both Tom and John listed as the inventors on the patent and Westcott as the assignee.

Time To Tell The World About The New Halo

It was shortly before the patent was issued that John and I got together and he asked me to try out his (and Tom’s ) new light modifier. I was teaching one of my first week-long classes at Tri-Angle Institute in Pittsburgh and was glad to give it a try.

The rest is history and I fell in love with the Halo and started using in all my portrait and wedding sessions from that point on – even today. My speaking career was just beginning to take off and I began telling the world, even the photographers in Australia and New Zealand, about this great new light modifier.

That’s also about the time John introduced me to Tom.  We hit it off immediately and have stayed close friends ever since. I still continue to do my booth demos at the Westcott booth every time we are both at the same show which is quite often.

A New Umbrella Is Born

Because of my friendship with Tom I was continuing to “bug” him about a special collapsible umbrella I wanted him to manufacture for me. I wanted a collapsible shoot-through umbrella but I wanted my umbrella to use the special and more translucent Halo fabric instead of the fabric Westcott used in their collapsible umbrella.  I started “bugging” Tom about it in 2006 and continued every year until Tom finally relented in January 2009. 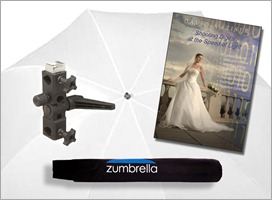 We ran several prototypes before I approved the final design. That final design became the best selling collapsible umbrella on the market even hailed by Scott Kelby receiving his high praise on his 2009 Holiday Gift Guide that year.  Yes, the Zumbrella [link] was born and 2009 was the year of the Zumbrella!

Why Go To Conventions? – This Is Why

If you’ve been following my blog all week you know I’ve been touting the benefits of being at a convention in person.  LaDawn and my visit with Tom and his wife Judy is another one of the strongest reasons to attend these types of events.

It’s not just about making new friends, which we have really enjoyed this trip.  It’s just as important to hook up with your old friends and acquaintances too. It is the reconnecting with friends that  brings the added richness to the entire convention experience.  Anyone who has been coming to these events as long as Tom and I will tell you the very same thing. That’s why it’s important to be part of the bigger picture. These added benefits, that add a richness to one’s life, you simply can’t enjoy if you only stay in front of a computer! These are truly the unadvertised benefits of attendance!!

LaDawn, Judy, Tom, and I wrapped our evening by seeing the hot show, Beatles LOVE Production at the Mirage last evening.  It was a wonderful evening with friends filled with laughs, a fabulous show, good food and great memories.  THANKS Tom and Judy! I hope your present and future holds the same terrific experiences.

Hey gang, that’s it for me today.  Hoped you enjoyed a little peek into this great profession’s industry history.  It was fun for me to look back, too.

Now LaDawn and I are taking the rest of the day off – for real!  Have an amazing weekend and I’ll see you back in Cincy on Monday.

See you on the flip side,  -David