The Dust Is Finally Settling From The Greatest Show On Earth!

We are slowly getting back to normal around here with the dust nearly settled from our blowout convention, PhotoPro Expo 2012. After making several trips from the Marriott Hotel back to our studio with a couple cars, we were finally unloaded by around 4:00 o'clock yesterday afternoon. By the time we got things halfway unpacked it was turning into a really long day and I decided to hold the post to today. Thanks to Dave Dabour and many others for suggesting we take a couple of days off. Don't worry though, I'll plan to have things back to normal beginning next week.

I was (am) on such a high from the success of the convention I'm still reveling in it’s warm glow. It's kind of cool to get calls from several vendors that were part of the show expressing their gratitude and appreciation for the huge numbers we pulled in for the tradeshow.

It's also just as exciting reading the dozens of e-mails from photographers who attended the show expressing their amazement and gratitude for us having such a great show right here in the Midwest. And thanks to attendee Raph from Canada for making PhotoPro Expo 2012 an international event!

The Greatest Show On Earth!

My thanks to all of our over 1000 attendees for making it the best show in many, many years in this part of the country. 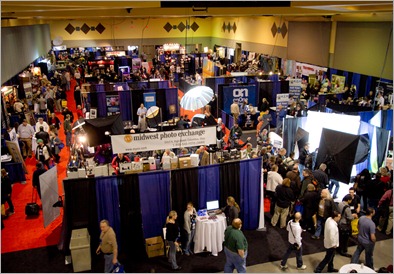 I spent most of the morning consolidating about 4000 images and about 35 hours of videos that we will be working on over the next  couple of weeks. We videotaped all the presenters and I'll be putting those online for all of our PhotoPro Network members.

So, if you didn’t get a chance to make a show and you would like to get a peek of the exciting weekend 1000 of us shared, you just may want to join PhotoPro Network and check out all the videos when they become available. Heck, $49 – and you can hear the speaker line up one more time – What a deal!  Here is the link to join right here! 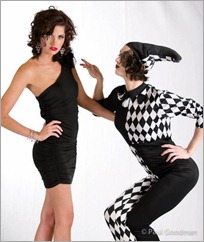 The biggest hit of the the tradeshow was a Westcott Fantasy Model Shootout. Check out the images uploaded so far right here. Remember, the top image wins $2,300 in Westcott gear!  I would venture to guess that  at the busiest times there were nearly 200 photographers photographing our four gorgeous  models and simply having a blast!

My buddy and Disney photographer, Rick Ferro, looked like a kid in a candy store  as he worked all four bays showing how to get some of the best photographs of our four models. 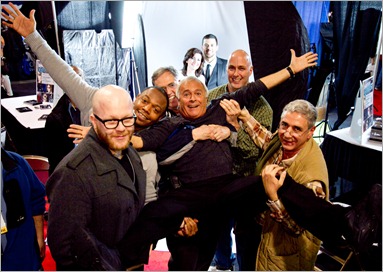 A Good Time Was Had By All!

It was really a great time for all photographers that attended. I was talking to Kirk Voclain, one of the top high school senior photographers in the country, who was scheduled for the 8:00 – 11:00 p.m. timeslot. Kirk says good naturedly, "You get them into the first class at 7:30 a.m. in the morning and then expect me to keep them awake until 11:00?  We laughed then he looked back at me and said that was his goal was to keep everyone there and not leave to the end of his program.

If anyone could do it, it was Kirk.  With his talent, infectious sense of humor,  beautiful photography, tremendous marketing tips, and Photoshop “razzle-dazzle” Kirk had them locked to their seats to the very end of his program. 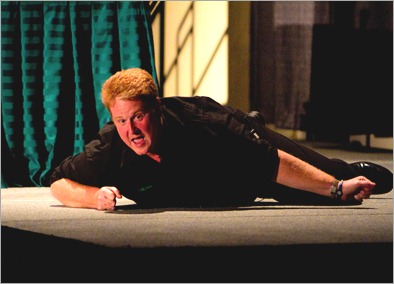 But that still wasn't the end of the evening - H&H, one of our very generous Platinum sponsors, hosted a pizza party for anyone that still had enough energy to stay awake for another hour or two.  It was a great opportunity to sit, relax and to make new friends.

I just can't say enough about our sponsors either. It was through their generosity that helped us bring in the top names in the country and offer some great hospitality. My sincere thanks to each and every one of them.

So, what's in store for next year? Were planning to increase the size of the tradeshow by about 30% shooting for a crowd of 1,200 attendees. I've got an entire roster of A-list speakers that am planning to call and, once word gets out about what a great time this year’s speakers had – that’s Jerry with one of the Tackle Buddies - 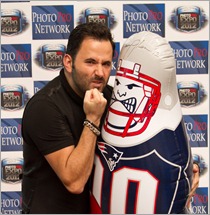 I'm sure they’ll want to be part of the action next year. I can't divulge who we have lined up so far but I will give you a hint that there's rumors that we may be in communications with – initials only! JK, JM and JS ;~)

Hey gang, if you've got some suggestions,  why not post them to the Comment section below. I've got a pretty strong list I’m working on with right now but if I'm missing anybody I sure would love to hear from you.

On that note gang, I'm signing off for today.  As I said things will get back to normal next week with our Technique Tuesday's our Business Day Thursday's and everything else in between. I’m still experiencing goose bumps from this year show. Mark your calendars now for PhotoPro Expo 2013 – February 7-11.