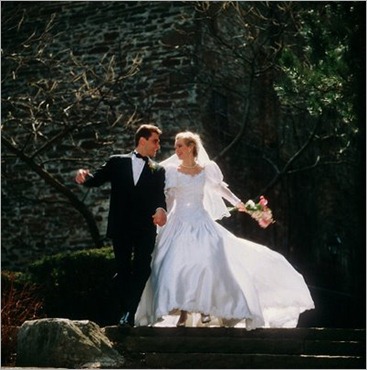 I just came across this image and continue to still love how it captures a timeless moment. It was made as part of an ad campaign for Art Leather Manufacturing about 20 years ago. Here was the assignment; photograph the bride and groom in a Spring setting leaving the church showing a lot of excitement and enthusiasm. Sounds simple enough, doesn't it. Well, we were doing the shoot in Toronto, in March! Nothing looks like Spring that far north in March, but we still had to pull it off.

I scouted the church location and decided to use this walkway. The sun was behind them - totally important when shooting outdoors. And, with the sun coming from behind, it added a certain warmth, at least visually, to the scene. In reality, the temperature on this brisk Toronto morning was more like 40 degrees - that's Fahrenheit, not Celsius.

The next challenge was to pick up the Spring look the art director wanted in the photograph. OK, we had warmth. We had excitement. We had enthusiasm. Where do I find green? My telephoto lens helped me isolate on a piece of hedge here and a pine branch there. It was just enough green, coupled with the warm sunlight to pull off a semi-Spring like look. The light on the couple was supplied by my off-camera Lumedyne flash (at the time) being held by my assistant on the right. Anyway, it all came together and was the cover of the album catalogue for many years.