Yep, it’s a bonus post this weekend.  It has little to to about photography but a lot to do with tenaciousness, guts and glory.

Maybe this should be reserved for one of my Business Day Thursday posts, but I'm running it this weekend.  The reason will be obvious by the end of the post. 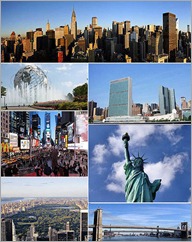 Seven years ago while in New York, I heard a 15 year old visitor to the city comment that one day she was going to move to New York and make this exciting city her own.  Throughout those ensuing years I kept an eye on that young lady who, BTW, has the "eye of the tiger" and usually accomplishes what see sets her mind to.

After finishing high school she decided to not head right into a major college but instead spend a year at a local community college so she could "bank" a few more dollars for that move to NYC she promised herself four years earlier.  After that year going to school and working at Best Buy nearly full time, she had reached the point both in her planning and in her bank account that she felt it was time to make the move to the BIG city.

At age 20 she cut all purse strings with her parents - remember that "eye of the tiger" part of her personality - she wanted to make the move to New York completely on her own.  In 2008 she packed her bags, moved to New York finding herself an apartment in the Sunset Park section of Brooklyn. 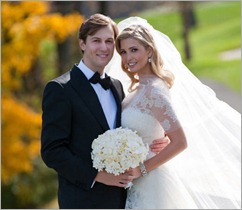 She also landed herself a fairly good job and a digital retoucher at Fred Marcus Studios, the premier photography studio in Manhattan.  Fred Marcus studio is known for doing most of the top celebrity events in the city including Donald Trump's daughter, Ivanka whose wedding took place October 24, 2009. In fact, the young lady to whom I refer was instrumental in completing much of the digital enhancement for the bride and groom's wedding album.

After she moved to the city, she felt is was going to take about a year to get settled and check out all the educational options in and around the city before she continued with her schooling in the city.  After visiting several universities, she was intent on attending Pace University concentrating her studies in marketing at one of the leading business schools in the country, the Lubin School of Business.

Tuition at Pace was rounding out at the "nose bleed" amount of $43,000/yr. Now this young lady's parents had set aside more than enough savings in a college trust fund to finance her college costs at any number of good universities, but it was coming up way short on the funds needed to finance studies at Pace.

Undeterred our NYC heroine set her mind about raising the necessary funds to meet the tuition requirements of Pace University.  About 9 months later she had managed to raise nearly $35,000/yearly in grants and loans to offset most of the university tuition.  Her trust fund would be able to cover housing expenses and carry her the rest of the way in her tuition needs.  Off to Pace she went.

During these past two and a half years she has left Fred Marcus Studios for an internship at Animoto, one of the fastest growing and most popular web sites for photographers in New York.  After completing her internship at the end of summer 2009, Animoto asked her to stay on as a part time employee working in their marketing department on special initiatives as she worked towards finishing her degree.

Her schedule was extremely tight both at school and at work but somehow she dug deep each semester for the strength and fortitude she needed to make it through the school year and all the final exams.  In spite of the hard work and very long hours, she was happy to oblige the web company and continues to work for that same company today.

From the conversations we've had over these last few years, she has been "burning the candle at both ends" in order to complete her school duties and keep up with the demands of her job responsibilities. But she did it!

On Thursday of this past week, I received an email from this young lady which read, "There it is" and with it attached a photograph of the following document. 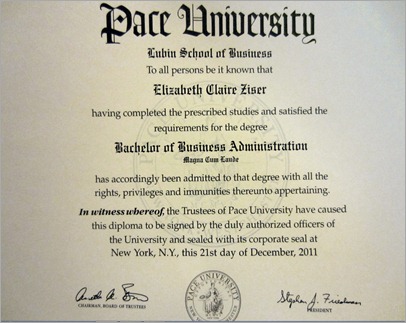 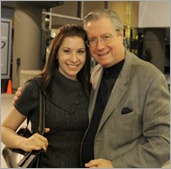 The name of the young lady, my daughter, Elizabeth Ziser.

Way to go Liz, you sure made your dad one proud father.  And to the rest of the world, I say clear the way because Elizabeth Ziser has the "eye of the tiger" and she is coming your way.

So, do you have the guts to be successful? I know someone who does and I'm thrilled to be her Dad!